Since the race for once-in-a-lifetime prospect Anthony Davis, tanking has been one of the most controversial topics in NBA conversation. The then-Bobcats aggressively lost games to put themselves in position to get the Brow, leading them to the worst winning percentage in the history of the league.

The biggest argument about tanking is usually regarding its morality, and whether a team and its fans should root for failure in order to find long term success. The league is also split on whether tanking is good for the NBA and its franchises, as shown by the failed “anti-tanking” vote that would’ve revolutionized the lottery system. However, for most NBA fans, there is little doubt that tanking is a “smart” plan. But is tanking really smart? Does it often work?

The obvious goal of a team that tanks is to get the number one overall pick in the draft, one of the most valuable assets in the NBA. When looking back at the success and failures of teams that have gotten number one overall picks in the past 10 years, you can break down the top picks into four groups: franchise picks, mediocre picks, busts, and too-soon-to-tells. Looking at the data, for number one picks, I assessed that there were 2 picks that were too soon to tell (Anthony Bennett and Andrew Wiggins), 5 Franchise picks (Derrick Rose, John Wall, Kyrie Irving, Blake Griffin, and Anthony Davis), 1 mediocre Pick (Andrew Bogut) and 2 Busts (Andrea Bargnani and Greg Oden). Here’s a look: 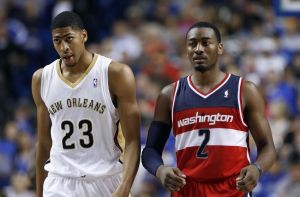 Guys like Anthony Davis and John Wall have made the number one pick an extremely valuable commodity.

When considering that these picks are being made on 19-year-old guys who may or may not have completely hit puberty, this record of success is astounding, and it backs up the aura of the number one pick, spearheading the value of tanking. In the past 10 years, number one picks have come out to 50% franchise players, 10% mediocre Players, 20% busts and 20% too-soon-to-tells. If you take out the players whose values are still uncertain, the franchise player rate rises to 63%. The number one pick is why teams tank, and if this were the NFL, where the team with the worst record was assured of the number one overall pick, tanking would be an absolute no-brainer, where throwing a season to get a young Derrick Rose on a rookie contract would be a godsend for any franchise. However, the lottery is currently set up for the worst team in the league to only receive a 25% chance of getting their golden goose in the number one overall pick. It is important to look to what has happened in the draft for the worst 9 teams in the past 10 years to see what their draft fortunes turned out to be.

Later high-lottery picks, like Marvin Williams and Michael Beasley, have had less success.

The first thing that will stand out when looking at this list of futility is that not one of the worst teams in the past 10 years (by winning percentage) actually got the number one overall pick. That horrible Bobcats team that put tanking into the national focus, of course, did not end up with Anthony Davis, but instead got Michael Kidd-Gilchrist, who is a solid player but not a franchise-changing talent. When breaking down this list into the same franchise picks, mediocre picks, busts, and too-soon-to-tells scale, you get a strikingly different ratio than for the number one picks themselves. There is only one true franchise player on the list in Chris Paul. In the mediocre category you have players like Derrick Favors, Tyreke Evans, and (being generous) Raymond Felton and Michael Kidd-Gilchrist. Then there is a long list of busts: Derrick Williams, Wesley Johnson, Michael Beasley and Marvin Williams. The breakdown ends up at 11% franchise players, 44% mediocre players and 44% busts. These teams that throw away their season for the number one pick and the chance for a John Wall or Derrick Rose more often than not got stuck with a Michael Beasley or Raymond Felton. To put this in perspective, let’s look at the draft luck of the teams in the last 10 years that had exactly 41 wins (which is exactly mediocre).

There are no franchise players to be found in this group, but there are two all-stars (italicized) and a number of competent starters. There is undoubtedly a fair share of busts in this group with Sean Williams, Shawne Williams, and James Johnson, but overall, it is remarkable how strongly the group of mid-round picks matches up to the group of picks from the 2-5 range. Clearly there is a large drop-off in value from the number one pick to the other top lottery picks.

The other argument that people have made in favor of tanking is that multi-year tank jobs help put teams in a better position in the long run. The example that the public points to is the Oklahoma City Thunder and their success. Let’s take a look:

The Thunder reaped a once-in-a-lifetime haul from their consecutive top picks, but other teams haven’t seen the same success.

In this table, the team that naturally stands out is the Thunder and their remarkable draft success. However, past them, no team made three good picks. Out of the eight teams that had at-least-two-year runs of futility that led to great draft picks, probably the second-best group of picks of the bunch was the Kings’, with Tyreke Evans, DeMarcus Cousins, and Bismack Biyombo. Of course, the Kings have not capitalized on these picks with a great win-loss record, and continue to be in the lottery every year, not making the playoffs since 2006.

Looking at the alternative to tanking, there are two teams that have really run against the current in regards to tanking and have instead each and every year continued to attempt to make smart basketball decisions and find diamonds in the rough, those squads being the Atlanta Hawks and the Dallas Mavericks. The Hawks had been shown as the poster boys of why teams should tank, with nobody wanting to be the fourth or fifth seed every year and lose in the first or second round of the playoffs. The Hawks, instead of tanking, attempted to sign players who would help their team each year be as competitive as possible. The recent extension of Kyle Korver and signing of Paul Millsap turned two extremely valuable assets when both players started, and continued, to massively outplay their contract. With these two guys at a low price, the Hawks were able to keep their core together and now sit at first place in the Eastern Conference. With Derrick Rose’s injury issues and the Cavaliers’ thus-far-disappointing first year together, the Hawks have a legitimate chance at making the NBA Finals this year.

The Mavericks also went the other way with their rebuilding process, as they had an aging team with Dirk Nowitzki, Vince Carter, Shawn Marion, and OJ Mayo on an expiring contract as their best players two seasons ago. Instead of selling off these old players and tanking to restart, the team decided to attempt to make smart signings and find undervalued assets. This turned into signing Samuel Dalembert, Monta Ellis, and Jose Calderon. Monta Ellis was a revelation in Dallas, playing the best basketball of his career, and Dalembert and Calderon were two of the main pieces that were traded to the Knicks in exchange for Tyson Chandler. Fast forward to flipping a couple more assets for Rajon Rondo this mid-season, and the Mavericks are right in the thick of the race for the top of the Western Conference. 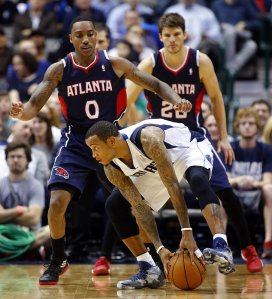 The Hawks and Mavericks have a combined record of 52-18 this season.

Perhaps the biggest issue with tanking is the amount of time that GMs are given to see their picks prosper. This could be at least four years after their high pick, which keeps GMs with a job for a pretty long time. The prime example of this is David Kahn, the former GM of the Timberwolves. Kahn was hired in 2009, when the T-Wolves had two of their picks from their tanking run still to make. In 2009, Kahn picked Jonny Flynn and traded for the pick after Flynn to select Ricky Rubio, both point guards. The next year, Kahn picked Wesley Johnson at number 4 in the draft. After these two terrible decisions, Kahn was given two more years to let his players develop, while he continued to make poor decisions. Finally, in the summer of 2013, the Wolves were rid of their poor management. This isn’t an isolated incident, with Rich Cho, the GM of the Hornets who made the poor picks in Cody Zeller and Michael Kidd-Gilchrist, still in charge after 4 years. Giving four years to a guy like Sam Hinkie, who shows a specific plan with analytics-driven decisions, won’t ruin a team, but giving Flip Saunders, who hasn’t found any recent success with his style, another four years by tanking this season might crush the Wolves yet again.

In review, there are success stories from the tanking route, but compared to just retooling a team’s lineup, tanking is not a cure-all solution to a franchise’s problems. However, at the end of the day, if a team has a group of smart management, they are more likely to be successful regardless of whether they tank or not.

One thought on “Does Tanking Really Work?”