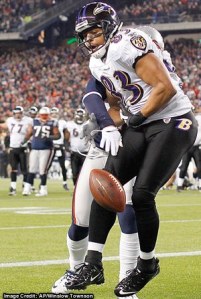 Yet another January trip to Foxborough for the Baltimore Ravens, as the New England Patriots will host the Ravens in a playoff matchup today for the fourth time in six years. For those who easily forget, the Ravens were a Lee Evans dropped touchdown pass away from sweeping the Patriots in their last three-playoff matchups. Here’s what to watch for in the next chapter of the Patriots-Ravens playoff saga. 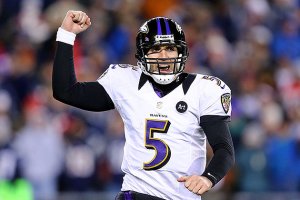 Throughout the regular season, the Ravens were a run-first offense. 43.9% of Baltimore’s play calls were run plays, the ninth-highest percentage in the league. Meanwhile, they ranked 24th in the league in pass play percentage. The Ravens seem to shift toward more of a pass-heavy offense come playoff time, though, behind “Playoff Flacco.” During their Wild Card matchup against the Pittsburgh Steelers, designed run plays accounted for 34.6% of the Ravens’ play calling. Baltimore relied heavily on Joe Flacco to beat the Steelers, and he got the job done. Flacco’s passer rating of 114.0, tied for highest rating this past weekend with Tony Romo, was his fourth highest passer rating this season. Baltimore’s newfound aggressive playcalling does not stop at just passing the ball more, either, as they are also taking more shots down the field. During the regular season Flacco’s percentage of passes thrown 20 or more yards down the field was 10.1%. That percentage more than doubled to 20.7% last Saturday. It will be interesting to see if the Ravens remain pass heavy against a Patriots defense who gave up the ninth-fewest rushing yards per game in the regular season, but also have an excellent secondary led by Darrelle Revis and Brandon Browner.

Baltimore’s secondary has faced its fair share of struggles this season, and their task does not get any easier today. The Ravens defense during the regular season gave up the eighth-most passing yards per game (252.8) and the eighth-highest completion percentage (64.5%). Baltimore by no means shut out Ben Roethlisberger last week either, who threw for 334 yards, one touchdown and a completion percentage of 68.9%. Despite that, though, the Ravens were able to force Big Ben into throwing 2 crucial interceptions. Creating takeaways should be the Ravens’ primary concern on defense today as well, as in their two wins against the Patriots in the playoffs, Brady was picked off three times (in 2009) and twice (in 2012). One would think in order to force these interceptions, the Ravens would have to blitz Brady all day, but it’s in fact the opposite – this regular season, Brady threw just nine interceptions, and only two occurred when he was blitzed, while the other seven were thrown when no blitz was sent. The Ravens’ secondary is going to need support in coverage from the rest of the defense, and hope that their front line, led by Haloti Ngata, can apply pressure on Brady without sending extra bodies at him.

Adding Rob Gronkowski to the Equation 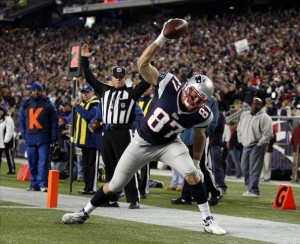 Everyone recalls the Ravens beating the Patriots in the 2012 AFC Conference game. But what most people may forget is that Rob Gronkowski did not play in that game due to injury. Gronk has had to fight the injury-prone label, and has battled some major injuries over the past few seasons. However, in 2014, he did not miss a single game due to injury, and was huge all year for New England. Gronkowski accounted for 20.4% of Brady’s regular season passing yards, and caught 12 of Brady’s 38 touchdown passes. Last week, the Ravens allowed Steelers’ tight end Heath Miller to haul in six receptions on nine targets for 76 yards. Miller did the majority of his damage in the middle of the field in between the first down marker and the line of scrimmage, while the graphic below shows Rob Gronkowski’s receptions by direction during the regular season. 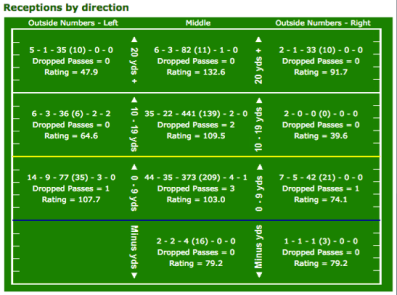 Clearly, in the same part of the field that Miller dominated the Ravens, Gronk was nearly unstoppable this season. Expect a huge game, and a spike or two, from Rob Gronkowski today. 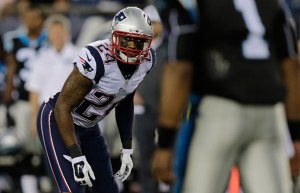 Joe Flacco has played as close to perfect football as one can play over his past five playoff games. He’s thrown 13 touchdown passes, no interceptions, has averaged 279.8 yards per game, and has won all five of those games. The image below shows just how impressive Flacco’s playoff streak without an interception is.

The key for the Patriots’ defense will be applying pressure to Flacco. When under pressure, he becomes a completely different QB, as the graphic below shows.

The Patriots’ secondary will play a huge role in the team getting pressure on Flacco. New England’s defensive backs, led by Darrelle Revis, will have to give the front seven time for their pass rush to develop. Although New England was a middle of the pack team in yards per game given up through the air this season (239.8, 17th), their pass coverage got the fourth-highest grade from Pro Football Focus. Keep an eye out for how Flacco performs when the New England defense gets pressure on him.

Flacco vs. Brady, Harbaugh vs. Belichick. Two storied franchises who have represented the AFC seven times in the last 14 Super Bowls meet in the playoffs once again. Will the Patriots redeem themselves of their 2012 defeat at the hands of the Ravens and make it to the AFC Conference Championship game for the fourth consecutive season? Or will the Ravens once again beat the Patriots in the playoffs? Either way, it should be a good one.

The Panthers venture to Seattle to take on the Seahawks and their “12th Man” in a rematch of their week eight defensive struggle, when the Seahawks were able to sneak away with a 13-9 victory in Carolina. The Panthers look to pull off the upset of the postseason, while the Seahawks fight to continue their journey to repeat as Super Bowl Champions. Here is what to look for in the second matchup of the year between these squads.

The Resurgence of Jonathan Stewart 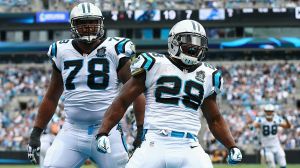 The Panthers were able to finish the regular season on a four-game winning streak on their way to winning the putrid NFC South, and Jonathan Stewart played a major role in keeping the Panthers’ playoff hopes alive. During the four-game winning streak, Stewart rushed for 402 yards, and the only running backs that gained more yards on the ground during that four-week span were Jeremy Hill (441) and DeMarco Murray (418). What made Stewart’s performance the last four weeks of the season so impressive was how mightily he struggled the thirteen weeks prior. In the 13 weeks before the Panthers’ four-game winning streak, Stewart only managed to rush for 398 yards. He continued his hot play last week against the Cardinals, where he was the only running back to crack the century mark during Wildcard Weekend with 123 rushing yards, averaged 5.1 yards per carry, scored a rushing touchdown, and had an absurd nine broken tackles. The Seahawks’ defense, though, during the regular season, gave up the third fewest rushing yards per game (81.5). This sets up for a true battle of an unstoppable force meeting an immoveable object, and will be very fun to watch. 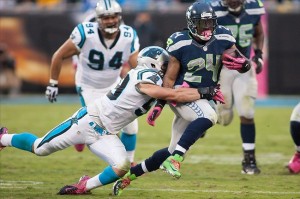 It is hard to argue against Luke Kuechly being the best inside linebacker in football. Even so, Kuechly is faced with a very large task that not many other players are capable of taking on: stopping the one and only Marshawn Lynch. The Skittle enthusiast, earth-shaking running back has been a problem for opposing defenses all year long, rushing for 1,306 yards and 13 touchdowns. But during the Seahawks’ week eight matchup with the Panthers, Lynch only gained 62 yards on the ground and failed to get into the end zone. Kuechly’s ability to disrupt run plays played a huge factor – he finished first in the league with 153 tackles and led all inside linebackers with 81 stops. Additionally, his 57 tackles in run defense rank fourth-most in the league by an inside linebacker. In both the divisional round and conference championship round of last year, Lynch was able to rush for over 100+ yards and scored at least one touchdown. If Kuechly and the rest of the Panthers’ defense can find a way to keep Lynch under 100 yards and out of the end zone, don’t be surprised if Carolina is prepping for a Conference Championship game.

Who Will be Catching the Ball for Seattle

Ever since the departure of Percy Harvin via trade to the New York Jets, who will catch the ball for Russell Wilson has been the million-dollar question for Seattle. The Seahawks have had nine games with nine different receivers leading the team in receiving yards. Only the 3-13 Raiders have also “accomplished” said feat. The last time a wideout had a 100-yard receiving game for the Seahawks was when Doug Baldwin went for 123 yards in a week seven loss to the Rams. Clearly, though, finding a standout number one receiver has not led to much trouble for the Seahawks, as they finished the regular season at the top of the NFC. However, if they expect to make another run for the Lombardi trophy, they will probably need a receiver to step up and provide Wilson with a go to target. The Seahawks can only rely on Lynch so much, as he failed to reach 75 yards rushing eight times this season; the Seahawks lost three of those games. Look to see if any of the Seahawks’ receivers step up for Wilson come game time Saturday night.

Seattle has their eyes set on the Lombardy trophy, but must be careful not to overlook this Panthers team. Carolina is riding a five-game winning streak, and their confidence couldn’t be any higher. These two very similarly designed teams will provide us with a much better game than many believe, and remember, not only is the task of repeating difficult, just winning a playoff game is hard enough. The last Super Bowl champions to win a playoff game the next year were the 2005 Patriots. Don’t start looking ahead to Dallas or Green Bay just yet, Seattle.