Sixteen weeks have flown by, and somehow, the NFL regular season is coming to an end. This week, the NFL announced which players the fans voted into this year’s Pro Bowl. Being voted to the Pro Bowl is a huge honor for any player, but the voting process is flawed, and usually turns into a popularity contest rather than voting for the best player at their position. Every year, there are a handful of players wondering what else they had to do to earn a spot in the game. This piece highlights the four biggest snubs of the 2015 Pro Bowl. 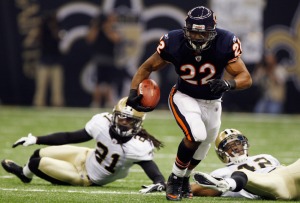 When you look at Forte’s numbers running the ball, you may understand why he was left out of the Pro Bowl, as he had a good year rushing, but nothing spectacular. His 3.9 yards per carry was a solid mark, but all the backs who made the Pro Bowl – Le’Veon Bell, Jamaal Charles, Arian Foster, Marshawn Lynch, DeMarco Murray and LeSean McCoy – had a yards per carry average of 4.7 and higher except for McCoy (4.6). Forte was only able to find the end zone six times as a rusher, the same number of rushing touchdowns as rookie running back Andre Williams. However, what makes Forte the biggest snub of the 2015 Pro Bowl is how productive he was catching the football. Forte had 102 receptions, tying Larry Centers’ record for most receptions by a running back in a single season, and making him only the third running back in NFL history to record more than 100 receptions in a season. Forte’s 102 catches are more than those of Dez Bryant, AJ Green, TY Hilton, Calvin Johnson, and Jordy Nelson, who all made the Pro Bowl as wide receivers. Forte has also hauled in four receiving touchdowns, only outdone as a running back by Ahmad Bradshaw and Pro Bowler Jamaal Charles, pushing his touchdown total to 10 (doubling McCoy’s total touchdown mark). With Forte’s substantial rushing numbers and absurd receiving numbers, it’s a real mystery how he didn’t make the Pro Bowl. I think he should replace LeSean McCoy. 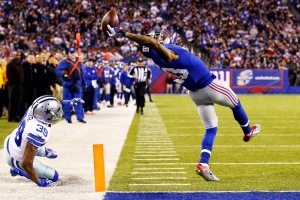 Considering voting for the Pro Bowl is a popularity contest, I was shocked not to see Odell Beckham Jr. on the Pro Bowl roster. Since his out-of-this-world catch during the Giants’ week 11 matchup against the Dallas Cowboys, debatably the best of all time, perhaps no player has been talked about more than Beckham. When you take a quick glance at OBJ’s numbers and compare them to those of other wideouts, aside from his 12 touchdowns, nothing is eye opening, but that is only because he missed the first four games of the season. His numbers compared to other wideouts’ from week 5 on, though, are elite. Since the week he first competed in an NFL game, Beckham Jr. is second to Dez Bryant for the most receiving touchdowns in the league with 12, third in receptions with 91, second in yards with 1,305, and fourth in the league in yards after catch with 481. The most telling stats for Odell Beckham Jr., though, are found in the advanced department. His wide receiver rating, courtesy of ProFootballFocus, which indicates the rating quarterbacks have whilst throwing to a certain receiver, was 127.6 – third best in the league. Furthermore, his cumulative PFF rating of 20.4 is best in the NFL since week 5. These stats are even more impressive when considering Beckham Jr. has been Eli Manning’s lone dependable target since Victor Cruz sustained his season-ending injury in week 6. I think he should replace AJ Green. 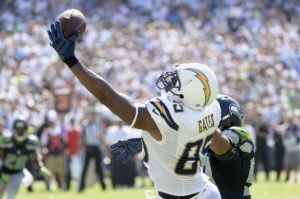 Having been selected eight times in his career, Antonio Gates is no stranger to the Pro Bowl. However, Gates failed to make the Pro Bowl last season or the season before that, and this year, he was robbed once again of a selection. His 12 touchdown catches put him right at the top of the league for tight end touchdowns with Rob Gronkowski and Julius Thomas. His 69 catches are only topped by Gronk, Jimmy Graham, Greg Olsen (all Pro Bowl selections) and Martellus Bennett. Where Gates has shined this year – and the “Pro Bowl” tight ends have struggled – is on deep passes. On passes that have traveled 20 or more yards in the air, Gates has three touchdowns, whereas all Pro Bowl tight ends combined have the same amount. With Gates’ ability to score from a wide range of areas on the field, his expected points added is at the top of the league. Expected Points Added (EPA) is the measure of a play’s impact on the score of the game. An individual player’s EPA is the sum of the EPA of the plays in which that player was directly involved. Gates’ value of 49.8 is second among tight ends to only Rob Gronkowski. To put the number into perspective, Pro Bowl tight ends Julius Thomas and Jimmy Graham have EPAs of 29.9 and 19.4 respectively – put those two Pro Bowlers together and they still come up short of Gates’ mark. On top of all that, Gates has been generally more reliable than his peers, with a drop rate of only 2.82, while Gronk, Graham and Thomas all have drop rates above 7.6. I think Gates should replace Jimmy Graham. 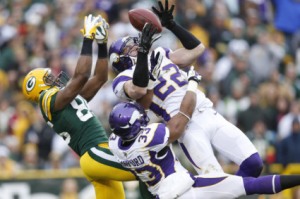 Most likely the first name on this list you haven’t heard yet before is definitely a player you should familiarize yourself with. To start, Smith is tied for the most sacks amongst safeties in the league, and neither of the safeties he is tied with made the Pro Bowl. Smith has also recorded 81 tackles, which is more than all Pro Bowl safeties other than Eric Weddle. He excels in coverage, with five interceptions on the year (third-most among safeties), and an opposing quarterbacks’ QB rating while throwing at him of 67.9. TJ Ward, who was voted to the Pro Bowl, allows QBs to have a passer rating of 104.5 while he is in coverage. As a matter of fact, the only Pro Bowl safety with a lower opponents’ QB rating while being thrown at is Pro Bowler Tashaun Gipson. Considering Smith plays for a small market team like the Vikings that haven’t experienced much success this year, it is not shocking to see his name missing from the Pro Bowl, but his performance on the field certainly warrants such a selection. I believe he should replace TJ Ward.

In all, the Pro Bowl is a game that few watch or care about. The honor of acceptance, though, especially for players reaching the twilights of their careers (Gates) and young players hungry for recognition (Smith), is enough to make snub acknowledgement important.