After such a humilating offseason, the New York Knicks need any semblance of hope. They’re currently 1-6 and battling a slew of concerns for this season and beyond. However, they’ve taken solace in the early returns from their #3 overall draft pick in RJ Barrett.

Originally from Canada, Barrett was the #1 high school recruit in the country before Zion Williamson (rightfully) overshadowed him in their one year together at Duke University. There were concerns about RJ’s athleticism, shooting, decision-making, defense, and more coming out of what was seen by many as a very weak draft class. He then proceeded to absolutely bomb his first two summer league games, enough that everyone from social media to the New York Post were already toying with the word “bust”.

He hasn’t exactly been a superstar in his first 7 NBA games, but he’s debatably been the best player on the Knicks: 1st on the team in points and steals, 2nd in assists; 3rd in both blocks and rebounds. Part of how he’s been able to achieve this is a poor supporting cast, but it’s also pretty difficult to score efficiently as a rookie in the NBA with a poor supporting cast in general. When watching the team this year, his skills and ability jump off the page, first and foremost with his ability to get to, and succeed at, the basket.

Here’s one example – look at how he makes a quick decision off the catch, attacks the closeout, and adjusts in midair for this improbable finish off glass:

How about here, when he uses the combination of his strength and patience to bully a large wing, a good defensive center, and the help defender, culminating in a very difficult right-handed finish:

What’s really stood out to me is his awareness. He already looks comfortable in the pick-and-roll – look at how he controls his pace here with hesitation to freeze both the guard and big defenders:

He can do it with his better-than-advertised right hand, too – check out this sequence against the Celtics:

It’s both lazy and unfair to compare RJ to left-handed scoring star James Harden, but I see a lot of James in RJ. Neither are exceedingly fast or athletic; it’s a combination of patience, strength, and ability to make a good pass that allow them to so seamlessly get to the cup. This at least bears some resemblance to the previous RJ clips:

Where RJ falters in comparison is his efficiency, where he was mostly comparable to Harden but lagged behind everywhere:

To this point in the NBA, though, he’s looked very confident in his three pointer, hitting a solid 10 of his first 28 shots from out there (35.7%). To me, though, what’s an even better sign than the rate they’re going in at is how confident he looks shooting them, and the different ways in which he’s shooting them. Look at how he immediately lines this one up off the catch, despite a man in his face:

Coach David Fizdale has actively run plays to get him looks from deep, and though he’s no JJ Redick, he’s shown the ability to run off curls and calmly knock these down:

It’s not just catch and shoot, though – here, his intention throughout the play is to shoot the three if Marcus Smart (All-NBA defender) goes under the screen, and he calmly lines it up and knocks it down:

What’s the most impressive part of his at-rim finishing and three-point shooting, though? The fact that that’s pretty much all he’s doing:

The Knicks don’t exactly have Daryl Morey at the helm, but RJ has been almost exclusively shooting at the rim and from the arc, despite having the reputation as an inefficient chucker in college. Here’s his shot chart this season, via Ryan Davis’ wonderful nbashotcharts.com:

Of Barrett’s 113 field goal attempts this season, only 11 have come between the paint and the three-point arc. That’s pretty impressive and shows a significant change in approach to what we saw from him at Duke last year. Here was RJ’s college shot chart via the Stepien: 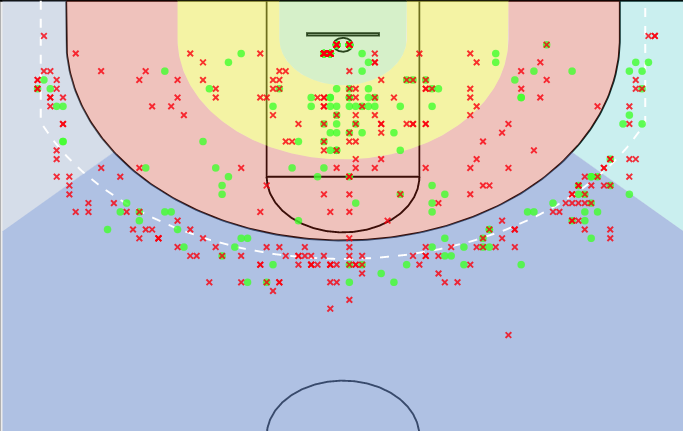 Not only was he shooting a ton more in those red and yellow zones, but it seems like he barely got any shots up inside the restricted area (green). Compare that to this season, where within just 7 games, he’s gotten up a ton of looks from inside the “circle”, and hit a bunch of them too (59.6% FG between 0-3 feet this season per Basketball Reference).

What’s changed? It’s hard to say. Maybe David Fizdale is a better coach than Coach K. Maybe RJ was trying too hard to get his numbers last year after Zion took his spotlight. There are plenty of theories, but it’s the result here that’s most important.

The signs get even better here for RJ, though. He’s getting to, and scoring at, the rim at those rates despite being surrounded by very few shooting threats whatsover. Non-RJ Knicks are shooting just 33.9% from 3 this year, and the defense is more than happy to leave the likes of Frank Ntilikina (3/13) and Julius Randle (1/18) out there to close in on RJ’s drives. So far, that hasn’t stopped him.

What about his defense? Scouts had many concerns for him on that end coming out of the draft, and though he hasn’t exactly been Tony Allen out there, he’s looked pretty serviceable, and that’s while guarding positions 1-3 and exerting himself with both a huge scoring load and ungodly minutes per game (more on that later).

He’s not the most athletic player, but he’s got great size for a guard and has shown surprisingly good defensive instincts. Even in a nightmare matchup against Kyrie Irving, watch how he completely sniffs out this play and baits the superstar point guard, then takes it coast to coast with a strong righty finish:

He had to guard Kyrie off ball too, and here, he rightfully keeps his hands up, defends both the ball and his man, and gets a steal:

He doesn’t have elite quickness tools, though. Watch how Jayson Tatum is able to get enough space for this shot in the most crucial moment of the game:

There’s plenty of room for improvement on D – he likely won’t ever be an elite defender, but he’s already shown he can be good enough to not be a real target for offenses out there. If his offense continues to develop as well, he can become a star even while being just below average on the other end.

Speaking of developing, it’s no secret that Barrett has played a ton of minutes this season. The high minute total makes sense for a few reasons:

Jon Macri, in his wonderful KnicksFilmSchool newsletter, argues that it’s not a big deal:

“The fact is, RJ Barrett is actually 19 years old, and he’s built like a mack truck. The Knicks’ doctors seem to think this is fine, and they have more medical degrees than I do, and probably you too.”

I do tend to agree, though trusting the Knicks’ doctors can get tenuous. Remember, (trigger warning, Knicks fans) Kristaps Porzingis complained about being tired well before his franchise-altering ACL tear. It’s hard to ascribe causation there, but there’s plenty of science arguing the obvious that more minutes lead to more injury. Plenty of people, including Knicks Twitter extraordinaire @DaRealBootum, have cited such studies, which show that more minutes and more distance traveled do correlate with risk:

RJ Barrett has played 219 minutes this season, most among all NBA players. He’s played 50 more minutes than any other NBA rookie.

Which NBA players are running the most miles per game?

It’s possible to play Barrett the most of anyone on the team, and with plenty of different lineups, without playing him 40 minutes in a 30-point blowout for a 1-6 team. I’m not as concerned as some are yet, but it will definitely be a situation to monitor moving forward.

In all, you have to think the Knicks have been pleasantly surprised on aggregate with what they’ve seen from RJ so far. His scoring ability and decision making considering his situation are impressive, though shooting remains largely a question mark. Key in his development will be surrounding him with the kind of players that give him the best chance to succeed – namely, good shooters. If he continues to play alongside the Elfrid Paytons and Julius Randles of the world, I worry about his development. The Knicks will have plenty of cap space and draft picks to build their skyscraper with in the next few years, and it seems like Barrett could very well be its foundation.

One thought on “The (Mostly Positive) Early Returns for RJ Barrett”