The 2017-18 Most Improved Player was the star of the team, giving them life on both ends of the court. Without another clear star on the roster, or multiple players the casual fan has even heard of, Indiana was surely in for a rough go of it – especially with other East contenders, Philadelphia, Milwaukee, and Toronto, loading up with talent at the trade deadline.

However, the Pacers are 13-11 since that fateful day. They’ve continued to hold their weight in the top tier of the East, in 4th place and a game up on the Boston Celtics. Whether it’s Ewing Theory or “Nobody Believes in Us” (there’s a Bill Simmons cliché for just about any possible NBA storyline), something is keeping these Pacers afloat.

And nobody has seemed to care:

Since (and even before) Victor Oladipo’s injury, no one has wanted to talk about the Indiana Pacers in the East.

The Pacers are fine with that – they’ll just go ahead and keep winning.

While it’s true they don’t have a second “star” after Oladipo, they have really good players across the board, and almost every one of them is better than you think they are.

Let’s start with Thaddeus Young. He ranks 26th in our WAR metric, ahead of such names as Joel Embiid, Chris Paul, and Klay Thompson. The Pacers’ 30-year-old Swiss-Army knife isn’t elite at much of anything, but he’s good enough at everything to make him one of the most valuable players in the NBA. He’s an efficient offensive player (52% FG; 36% 3PT this season) who rarely turns it over, rebounds, and can defend multiple positions. He’s no Draymond Green when it comes to passing or protecting the rim, but he’s pretty close, and is a far better scorer.

He can work you in the post and hit a spinning hook shot:

Or he can take you off the bounce from the perimeter, and hit you with a sweet finger roll:

His defense is just as well-rounded. Young is currently 7th in the NBA in steals, and 9th in steal/turnover ratio. He’s got great hands, so don’t fall asleep if he’s guarding you:

Though he almost never plays the 5 due to the excellent duo of Myles Turner and Domantas Sabonis switching off the reins, his size and strength (6’8″, 221 pounds) allow him to lock down post players and get great position for defensive rebounds. Look at how he absolutely shuts down debatably the best player in the NBA on the block:

Thaddeus is only one piece of a huge puzzle. Perhaps the biggest step-up on the team has come from Bojan Bogdanovic, a 29-year old journeyman that’s probably best-known as just a spot up shooter.

Narrator: he’s not just a spot up shooter.

Since Victor Oladipo went down, Bogdanovic has looked the part of one of the best scorers in the NBA. Really. Since January 23rd, he’s averaged 21.3 points, 4.2 rebounds, and 2.2 assists per game on 50% FG and 40% 3PT. Go ahead and read that again. He’s one of only 3 players in the entire league averaging 21 points on 50/40 shooting over that stretch, the other two being Karl-Anthony Towns and Hawks stud John Collins.

Bogdanovic has always been an efficient scorer, with career percentages of 46% from the field and 39% from three, but he’s never averaged 15 or more points in a season. This year, he’s got his average up to 17.8 per game, and with the extra usage, he’s still shooting a career high in both field goal and three point percentages, which is remarkable as the now-#1 scoring option on a top-4 seed.

The man can put it in the basket from just about anywhere, as he’s shooting league-average or better percentages from you-name-where on the court:

There are plenty more players that deserve individual profiles, too – the Pacers have the most top-100 WAR players out of anyone in the NBA; the only team with 6. Darren Collison, for example, has been consummately underrated; he’s averaging 6 assists per game for the first time in his career at age 31, while shooting over 40% from three for the fourth straight season. Tyreke Evans, Cory Joseph, and Wesley Matthews are all legitimate rotation pieces for a contending team.

I’ve already mentioned Indiana’s twin towers down low in Turner and Sabonis, but their names bear repeating. The Pacers have debatably the best 48 minutes of center in the entire NBA between these two, and both are just 22 years young. The one-two punch is dynamic: Turner is putting up a Defensive Player of the Year-caliber season, in which he’s leading the NBA in blocks per game and is 2nd in blocks per 48 minutes to the rookie savant Mitchell Robinson. The blocks haven’t been empty, either – among players averaging at least 25 minutes per game, he’s 5th in Defensive RPM, 4th in Defensive Rating, and 3rd in Defensive Box Plus-Minus. Having an anchor like Turner on the back end of your defense is a huge component to a contending team, and the Pacers have one. 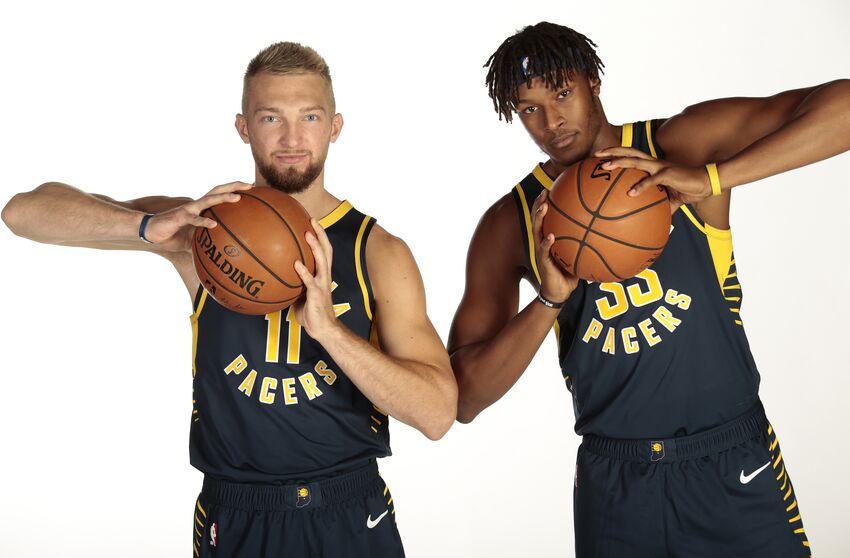 Domantas Sabonis and Myles Turner have been a pick-your-poison duo for opposing centers.

That’s not to knock Sabonis – he’s debatably been even better than Turner, playing his name into the conversations for both Most Improved Player and Sixth Man of the Year. Sabonis is one of only 5 players this year to average 14 points per game on 59% FG (I really wanted to round him up to 60), alongside such studs as Steven Adams, Rudy Gobert, and Clint Capela, and he’s doing it off the bench. Sabonis began his career as a mostly spot-up three-point shooting 4 for Oklahoma City (2 3PA per game his rookie), but he’s transformed himself in Indiana to an interior beast. He can get his shot over good defenders in the post, with a soft touch from well beyond point-blank range:

He can still space the floor if that’s what the play calls for:

And he’s been an absolute beast on the glass, grabbing 9.1 rebounds per game in under 25 minutes a night. That’s good for more rebounds per 36 minutes than Karl-Anthony Towns, Anthony Davis, Clint Capela, and DeAndre Ayton. Like the rest of the Pacers, Sabonis is more than might meet the untrained eye.

What’s the future for this team? They’ve got the grit-and-grind type of style that typically makes life difficult for opponents in the playoffs, and if they keep it up, the Pacers will have home-court advantage in the first round. They have some future questions as well – they have 7 impending free agents this summer, including 4 of their 5 starters.

Until then, though, their lack of star power will likely keep them off the radar until playoff time. Then it will be time to put up or shut up, and show the world that they truly did deserve to be mentioned among the top teams in the East. Any title aspirations in Indiana still likely need wait until the return of Victor Oladipo, but with each win they continue to manufacture, it becomes harder and harder to bet against them. The only thing harder would be playing against them.

One thought on “How is Indiana Keeping Pace in the East?”