To the dismay of many, but mostly Magic Johnson and LeBron James, Anthony Davis is still a New Orleans Pelican.

There are a multitude of reasons for that result. Maybe GM Dell Demps didn’t want to deal with the Lakers at all, just because they’re the big bad Lakers. Maybe Gregg Popovich whispered something. Maybe they were unconvinced of Kristaps Porzingis’ full recovery from injury. Maybe potential suitors just didn’t think they could convince AD to re-sign.

Or maybe, it was Jayson Tatum or bust.

Danny Ainge and the Celtics have coveted the opportunity to trade for someone like Davis ever since they started hoarding assets with the now-infamous trade with the Brooklyn Nets. Bill Simmons was singing a different song in those days:

That rumored Celtics-Nets trade is so bad for Boston that Doc Rivers just quit on the Celtics again.

Tatum was an absolute coup for the Celtics in the 2017 Draft, when they traded the then-consensus #1 overall pick in Markelle Fultz for the rights to the 3rd pick (Tatum) and another first-rounder. Tatum went on to an All-Rookie 1st team in one of the most celebrated 1st-year campaigns in NBA history, while Fultz has already been flipped for a piece of gum, a quarter, and the Microsoft Word paper clip.

Of course, the Celtics were unable to trade Tatum to the Pelicans before the deadline due to a CBA conflict with Kyrie Irving’s contract, but there have been rumblings that he’ll be available when the time comes.

Some Pelicans fans have clearly already begun to think about Tatum in navy and gold.

It sure seems the Pelicans are keyed in on Tatum, considering they’ve put themselves through a crazy controversy to keep Davis past the trade deadline. It’s a tough scenario: do you hold out a healthy superstar to tank (and send ticket prices down in the process), or keep a lame duck playing in an incredibly awkward situation?

Much has already been made about how much AD is worth. What about Tatum? He’s found himself in a bit of a sophomore slump. The Celtics had huge expectations this season:

(Bill, I’m doing it because I love you.)

Too many cooks in the Boston kitchen has seen Gordon Hayward struggle to return to pre-injury form, players like Terry Rozier and Jaylen Brown regress, and Al Horford look old for the first time (though he’s come on strong the last few games).

No regression has been as stark, though, deservedly or not, as Tatum’s, mostly because of the enormous hype his rookie year brought. Here’s how he’s fared in some of the major rate metrics by season:

It’s clear Tatum has struggled to build on his first campaign. Why?

You’d think it might be easier for Tatum to score considering a year of experience, and playing with a point guard at the top of his game in Kyrie Irving (who he was without during his memorable playoff run last year). But his efficiencies are down almost across the board:

There’s no doubt he’s taken on more responsibility this year, with more field goal attempts per game. Some people are even wondering if Kobe “broke” him.

Much has been made about Jayson Tatum’s workouts with Kobe Bryant this past summer, and whether they affected his style of play.

He then attacks hard, with a head of steam toward the rim, through traffic: 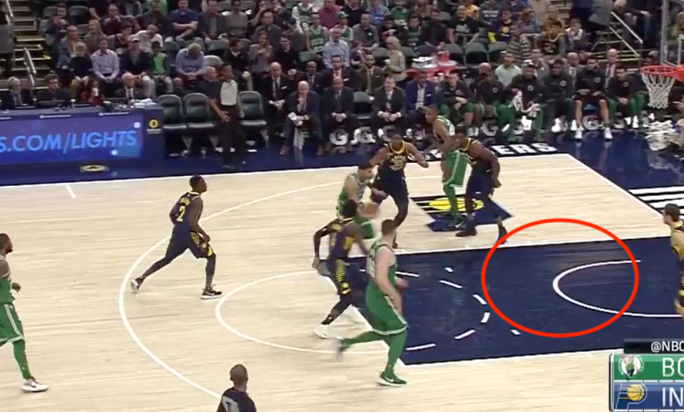 And finishes with a highlight-reel dunk. Needless to say, a dunk right at the rim is a highly efficient shot.

Now, let’s take a look at this similar-starting situation, from his sophomore campaign:

But once he hits the crease in the defense, he hesitates, allowing defenders to get into position. He opts for a 20-foot, contested, pull-up 2 pointer. There were 18 seconds on the shot clock.

Is Tatum becoming too jumper-reliant? Is he trying too hard to take over and focusing too much on getting his? 42.7% of Tatum’s field goals this season have been unassisted, up from 34.0% his rookie year.

Of course, it’s somewhat difficult to pick apart which is the cause and which is the effect –  is poor decision-making leading to lower efficiency, or is his low efficiency more allowable considering the larger offensive load he’s taken on? It could be a blend of both.

His shot charts tell an interesting story. His rookie year:

And this year so far:

It seems clear Tatum has changed his style. He’s also taking a lower proportion of threes, though the difference is less stark – 28.9% of his rookie year shots came behind the arc, compared to 23.6% this year. Unlike the paint shots, though, this lower frequency has been accompanied with a lower efficiency, which could be cause for concern.

Of course, this season is far from over, and Coach Brad Stevens is one of the league’s best. Perhaps the best way to analyze Tatum is to simply take a deep breath and a step back. If his incredible rookie season had never happened, there would likely be far less being made about this sophomore “slump”, in which he’s averaging 16.5/7.3/1.9 on 45%/38%/86% as a 20 year old.

This gets to the counterintuitive way we often think about 2nd-year players – that’s an insane statline for a player of his age, but knowing what we know about his sophomore year, would we consider his future expected value to be higher if his rookie year had been better or worse? Logically, all else equal in the 2nd year, an excellent 1st year would give any projection system a higher future value than a poor one. FiveThirtyEight’s CARMELO projects him as an All-Star, with such comparisons as Kevin Garnett, Giannis Antetokounmpo, Chris Bosh, and… Anthony Davis.

Of course, his lows can be frustrating:

But all young players have lapses, especially against great opponents. For Tatum, the lows are almost always balanced out with highs. He responded on the next play:

If you ask me, it’s still clear Tatum is the best potential asset available for the Pelicans. How many players that young are scoring at as high a volume and efficiency, with respectable defense? Here’s a list of all of the players in the league under 21 averaging at least 25 points per 100 possessions on a true shooting over 55% with a defensive rating under 110:

Tatum ties with Luka Doncic, who is debatably the most untouchable trade asset in basketball right now, in win shares.

And here’s a list of all the 19 year olds in NBA history to average at least 22 points on a true shooting over 55% and a defensive rating under 105:

Basketball can be poetic, can’t it?

2 thoughts on “What the Pelicans are Waiting For”