The Toronto Raptors have won at least 48 games in each of the past four seasons, and barring catastrophe, this will be their fifth. They currently hold the top spot in the Eastern Conference, sitting 2 games above the second-place Celtics and a whopping 9 games above the third-place Cavaliers. They’re 9-1 in their past 10 games. Despite all of these easy to access, and perhaps even well-known, facts, they are not taken seriously. Why?

The Raptors get no respect, mostly because of their consistent playoff failures. They’ve never made it past LeBron James even with all of their regular season success the past few seasons, and their two best players across that stretch, Kyle Lowry and DeMar DeRozan, have not played up to their All-Star billing, or even close to it, in the postseason. 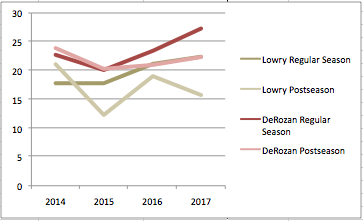 Of course, given the better competition on average in the playoffs compared to the regular season, you could expect to see some regression statistically, but not to this extent, especially considering stars are going 110% in the postseason when, let’s just say that sometimes doesn’t happen in the regular season.

This isn’t really new information, however. The duo’s playoff struggles are well-documented. About a year ago, Zach Lowe posited: “Something about the Raptors’ offense just doesn’t work in the playoffs. Their run to the conference finals [in 2016] was among the least inspiring in history: seven-game squeakers over one mediocre team and one forgettable 48-win Miami team… Maybe the lack of collective playmaking in Toronto’s low-assist system is more of a handicap in the playoffs, when teams trap DeRozan and Lowry, and dare Toronto to beat them with passing and shooting the Raptors don’t have. Is that on the coaching staff for building that system, and failing to adapt? Or is that style in the DNA of Toronto’s star players?”

The question, now, isn’t about whether the Raptors have disappointed in playoffs past, but whether this team has the potential to turn it around in 2018. How different is this year’s squad than the past four years’? 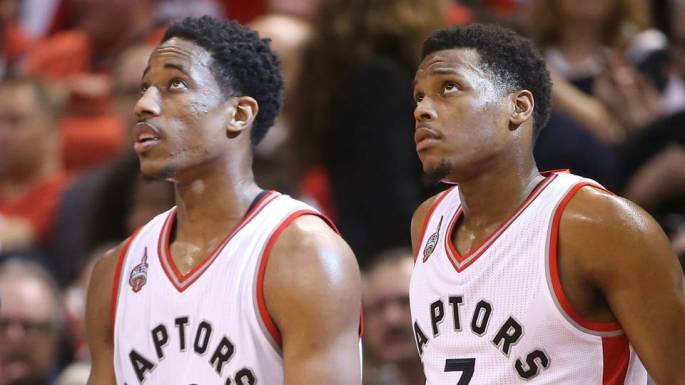 Kyle Lowry and DeMar DeRozan need to find a way to turn things around in the playoffs this year.

Since this core’s first trip to the playoffs, the 2018 edition has debatably both the most efficient offense and defense (a lower defensive rating indicates fewer points yielded):

To put their offensive and defensive ratings (113.9 & 105.1, respectively) in perspective, they both rank top 3 across the NBA, and the Raptors are the only team top 3 in both metrics this season – their offense trails just the Warriors’ and Rockets’, while their defense trails only the Celtics’ and Spurs’. The difference between those two ratings (net rating) places the Raptors as the third-best team in the NBA and the best team in the East – by far: 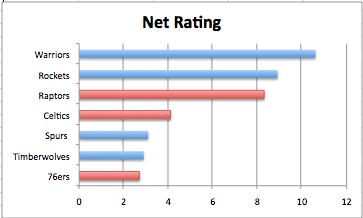 What’s made Toronto so much better this season? A big part is the development of DeMar DeRozan. Always a good scorer, he’s made real strides in both efficiency and defense this season that figure to make him more effective in the postseason. Always a fan of the mid-range game, which tends to provide the lowest points per shot attempt on the court, DeRozan has not only cut back on the 2-point attempts this season but improved his efficiency there: 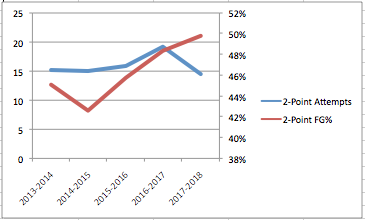 He’s also helped the Raptors offense stretch the floor when he doesn’t have the ball – never a great shooter from behind the arc, DeRozan is averaging a career high in 3-point attempts, and hitting them at a still-not-great, but far more palatable, clip – especially considering the larger sample size this season: 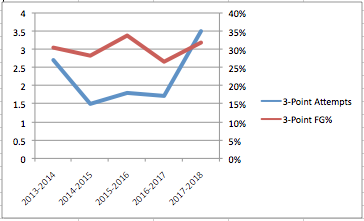 Even just shooting more threes forces the defense to pay more attention to DeRozan on the perimeter than they have in years past – and though his 32% success rate from downtown doesn’t look great, it translates to a similar scoring efficiency as his 2-point shots:

That table means even more when you consider not only the fact that DeRozan is shooting the best 2-point percentage since his rookie year, but that the 0.498 includes wide-open layups and fast-break dunks which are essentially a guaranteed 2 points with each attempt.

DeMar DeRozan has ever-so-slightly expanded his shooting range this season, but it’s had a big impact.

His offensive efficiency has extended to playmaking, too, where he’s finally been able to consistently make opponents pay for doubling (career-high 5.2 assists per game) while still limiting his turnovers, perhaps a response to Zach Lowe’s theory about lack of collective playmaking:

Amazingly, while DeRozan’s offensive game has blossomed, he’s managed to have a career year on defense as well. Though at 6’7″, 221 pounds, with a 7′ wingspan, the physical potential has always been there, (Jimmy Butler and LeBron James, two of the league’s best perimeter defenders, are both 6’8″ with 7′ wingspans) it’s finally starting to translate this season. DeMar has matched his career high in steals per game (1.2) and made strides as a team defender matching his career high in defensive box plus-minus (-0.7). His defense has always been suspect at best – the results of a Google video search of “DeMar DeRozan defense” either reference his inability to play it or his opponents’ ability to play it against him: 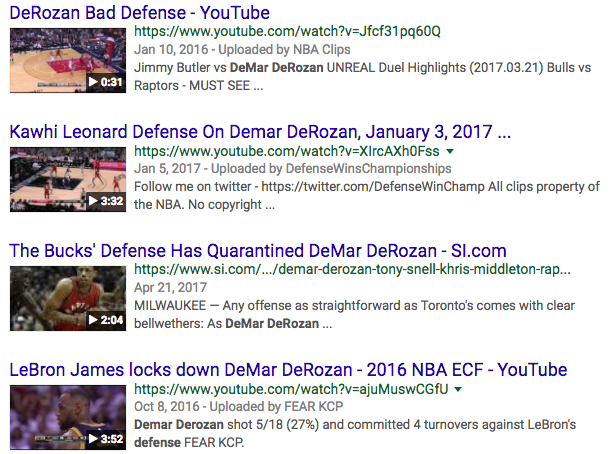 If he can continue to play around-average defense, it would mean big things for the Raptors’ perimeter.

Toronto has also improved their depth this season, and young depth to boot. Though casual fans may not know names like Jakob Poeltl (22 years old), Pascal Siakam (23), Fred VanVleet (24), and Delon Wright (25), they’ve been one of the most effective bench units in all of basketball. As a matter of fact, they currently hold the best net rating of any lineup in basketball that has played over 100 minutes this season when they play with fellow benchmate CJ Miles – and that’s not just bench lineups. Dwayne Casey deserves a ton of credit for turning this five into really efficient ball-sharers and developing the Raptors’ draft picks (credit to GM Masai Ujiri), which have usually fell into the range normally considered too low to find studs yet too high to have had a contending team the previous season:

The bench has been so good that it has actually gotten some ESPN FaceTime recently (though only 1 minute, 13 seconds of it):

The Raptors have gotten improvements from their stars that could make them more difficult to guard in the postseason, and improved depth that could spell those stars if they indeed falter. All season, they’ve been close to the Celtics on defense and the Rockets on offense. If ever there were a year for Canada to host some NBA Finals games, this would be it.