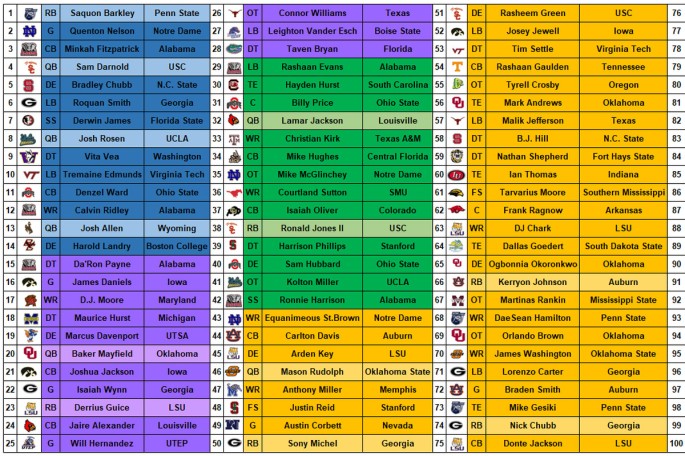 Thirty years can be considered a lifetime in the world of professional sports. Consider the fact that thirty years ago, in 1989, only two quarterbacks passed for over 4,000 yards. Compare that to last season, which saw twelve signal callers eclipse 4,000, and it’d be safe to say we are talking about two completely different sports. The evolution of football is both undeniable and well-documented – teams pass more than ever, bone-jarring hits have been virtually eliminated due to rule changes in favor of player safety, and the every-down back who gets over 270 touches – ten in 1989 compared to just Ezekiel Elliot in 2018 – is a thing of the past. But what has this change in play done to how teams approach the draft, and specifically, the first two rounds of the draft, which are vital to a team’s growth and success down the road?

END_OF_DOCUMENT_TOKEN_TO_BE_REPLACED

Finally, we are just one day away from the NFL’s main offseason event. Fans’ hopes are as high as they get, speculations continue to swirl, and those that are fortunate enough to have tickets are preparing to let their boos be heard when Roger Goodell takes the stage. For this mock draft, we are assuming no trades are made, and each team makes their own pick.

END_OF_DOCUMENT_TOKEN_TO_BE_REPLACED

Three national championships in four years.  Dozens of draft picks making millions of dollars in the NFL. The Alabama Crimson Tide, led by defensive gurus Nick Saban and his henchman Kirby Smart, have been without question the most dominating team in college football for the last five years.  Viewed as the kings of college football, the Crimson Tide pride themselves on their defense.  Generally speaking, they have been almost impossible to score against.  However, the Alabama defense has been exposed the past two years against a certain type of offense- the hurry-up spread with a quarterback capable of evading defenders.

END_OF_DOCUMENT_TOKEN_TO_BE_REPLACED

After winning its conference tournament this past weekend, the Wichita State Shockers became the first Division I men’s basketball team to enter March Madness undefeated since the 1991 UNLV Runnin’ Rebels. Wichita State was also the first team to go 30-0 in the regular season.