The Mets have cooled down in the couple of weeks since their historic 15-1 stretch, but have still done enough winning to keep themselves firmly in the playoff picture. While they’re a team that’s been known to have the injury bug over the past few seasons, this season things have been very different. Jacob deGrom, Noah Syndergaard, Marcus Stroman, Zack Wheeler, and Steven Matz are all (for now) healthy, and the intact rotation is the top-5 unit Mets fans always assumed they would have “if they stayed healthy”.

The issues have come on the diamond itself, as the Mets recently have been missing an incredibly long list of starting-caliber players. Some are likely out for the season, but some are slowly trickling their way back to the roster. These reinforceMets come at critical positions, as the Mets have rolled out some absolutely brutal lineups recently. Here is the starting 9 for last Friday’s loss vs. the Royals: 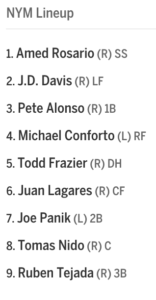 It’s difficult to make a playoff push when 6 through 9 in your lineup looks like this:

Considering WAR literally attempts to measure the number of wins a player is worth over a replacement player, these replacements haven’t cut it. Juan Lagares has swung a hotter bat lately, and Joe Panik hasn’t been useless either, but both have had once-elite defense slip this season.

Tejada has since been designated for assignment, and Nido’s been replaced with a cookie cutter version of himself in René Rivera due to a concussion. Non-major leaguer Aaron Altherr was also recently DFA’d as the Mets slowly but surely look to transform their depth from a minor league bench to real solid players:

The squirrel is back!

2-5 in his first two games back from the IL, McNeil appears to be healthy. He’s a hugely important cog for the Mets, not only for his bat, but his glove – McNeil’s ability to play solid defense at at least 4 different positions this season (second base, third base, left field, and right field) makes him an extremely valuable reinforcement. Mickey Callaway can employ McNeil’s bat in just about any situation as he tinkers the lineup around him. Playing a righty pitcher? Joe Panik can play second while McNeil mans the outfield. A lefty? Why not get Juan Lagares’ defense in center field and slot McNeil in at second?

Jeff’s been nothing short of a legitimate All-Star this season. He’s such an important table setter for the offense with his ability to get on base (.402 on-base percentage this season) that comes from both his underrated plate discipline and his simply uncanny hitting ability.

High and outside against the righty? Line drive to left:

Down and in against the lefty? Line drive to right:

Jeff will do whatever it takes to get on base:

Comparing McNeil’s Statcast summary (left) to that of one of his replacements in Joe Panik (right) looks like the two are playing a different sport: 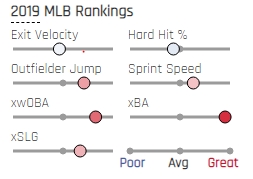 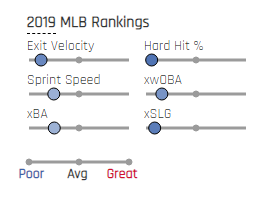 Lagares and Tejada’s samples were too small to provide the visual summary, but the point is the same. This is an important upgrade for the Mets.

Everything Jeff McNeil has been as a table setter for the Mets this season, Nimmo was last season. His .404 OBP and solid center field defense led to a team-leading 4.5 position player wins above replacement, but his path to getting on base 40% of the time is drastically different to that of McNeil – Nimmo is more of a “three true outcomes” player, consistently walking over 15% of the time, striking out over 25% of the time, with a career batting average of .253. Compare that to McNeil, who’s walked only 6.3% of the time this year, but struck out only 14%, and is hitting an insane .333 across his young career.

That difference in style gets us to an important talking point – Nimmo’s struggles when he played this season. Brandon had an absolutely brutal start to the year, then dealt with injuries. In his 43 games this season, his once-sparkling OBP was down at a terribly average .344, and his insane 29.8 strikeout percentage would be 4th-highest in all of baseball.

Was it just a slump or something serious? I think that his polar-opposite approach to McNeil’s might lead to some streakier performances – since he doesn’t make a whole lot of contact normally, if he starts overly missing some balls, his whole game can go downhill. His incredibly patient approach (his walk percentage is actually currently a career high in 2019, and good for 7th in all of baseball) leads to deep counts, and when the contact doesn’t come, the strikeouts pile up in bunches.

Another aspect to Nimmo’s patient approach is the fact that he simply gets fewer batted balls than other players in general, since over 40% of his career plate appearances have ended in either a strikeout or a walk. This means that his batting average is a far less useful statistic than the batting average of someone like Jeff McNeil, because it comes in a much smaller sample. In that sense, a hitting slump can end up being overreacted to. His sad .200 batting average this season represents just 87 balls in play; Jeff McNeil’s .336 represents 354.

I think there’s plenty of reason for optimism with regards to Nimmo. Even though he looked completely lost for most of the early part of the season, he was still able to post a positive WAR, which can’t be said for Aaron Altherr, Keon Broxton, or Juan Lagares this season. His infectious energy and defensive versatility should provide the team a boost regardless of what’s happening with his bat.

He sure seems to be ready:

Brandon Nimmo continued his rehab assignment with a big game last night for Syracuse, going 3-for-4 with a pair of doubles. #Mets

Jed Lowrie has been confirmed by multiple sources to be playing in rehab games, and could be nearing his Mets debut as the clock turns to September. It’s been a crazy road for Lowrie, but if he’s truly healthy when he returns, he will be a piece that has been highly underrated since Brodie Van Wagenen’s now-infamous acquisition. Despite the ripe age of 35, Lowrie has gotten better as his career has gone on (in terms of his actual on-field performance, of course). His 4.9 position player WAR last season with the Athletics would have been the best on the Mets! He’s also been pretty remarkably consistent his last two seasons:

Of course, there’s always a chance he falls off a cliff this season, especially considering the crazy luck he’s had with injuries. I’d say, though, if he does one day touch the field, you can expect a pretty excellent contributor. Here’s one way of looking at it:

Lowrie would have to regress very significantly to not be a serious upgrade at at the plate from the second base position when he comes back, while providing similar value defensively. He doesn’t appear to be as close to a return as Nimmo, but for the first time in months it seems a good bet he’s almost back.

Of course, players will still likely hit the injured list over these next few weeks, and to an extent replace the guys there now. Robert Gsellman just landed on the IL last Saturday, for example, and some people already there have no hope whatsoever of returning this season (see: Céspedes, Yoenis). Robinson Canó and Dominic Smith likely won’t return until the end of September in even the most optimistic scenario. After a tough series against Atlanta that saw their playoff odds drop below 40%, the Mets have a huge stretch coming up against fellow Wild Card contenders like the Cubs and Phillies – with their roster, day by day, getting stronger.

This article can also be found on MetsMerizedOnline.com