Don’t be surprised. Be ready.

That’s the mantra Mets shortstop Amed Rosario has tweeted, played, and lived by in his past few years in the New York organization. The words held a lot of weight in 2017, when Rosario was ranked the number 1 prospect in all of baseball by ESPN’s Keith Law, just above the Yankees’ Gleyber Torres. Since, Torres is a 2x All-Star in the Bronx, while Queens’ middle infielder has been mostly quiet, already being labeled a bust in multiple circles. Now, in 2019, most baseball fans would ignore such a mantra. In already his 3rd MLB season, Rosario’s 1.0 fWAR ranks just 19th among shortstops, with the second-lowest defensive WAR component among all shortstops in baseball.

However, there appear to be signs, both on and below the surface, that lead to real optimism about Rosario eventually fulfilling his billing as a prospect – slow, but steady, improvement.

Even though he’s already nearing completion of his 3rd MLB season, at just 23 years old, Amed Rosario remains the 2nd-youngest shortstop in all of baseball (behind Torres). That means he has plenty of room to grow, and late in his age-23 season, returns are promising.

This July, he’s had the best AVG, OBP, and SLG month of his career. and that’s not a total season outlier – look at the trends in his full-year slash line across the young player’s first three seasons:

The changes are incremental, but undeniably positive – this is a player who’s getting better. Take a look at his strikeout-to-walk ratio and you’ll see that his approach is markedly different now than it was in his rookie season:

Dig a little deeper, and things get even more promising, hinting that his slash line improvements are really due to a change in approach at the plate and not just something like balls-in-play luck. Every year, his ground ball percentage has declined (indicating fewer groundouts/double plays), while his hard-hit percentage (indicating better, and more productive contact) and center-hit percentage (indicating more balls taken up the middle as opposed to pulled; a more balanced approach) have risen. The effect is pretty stark: 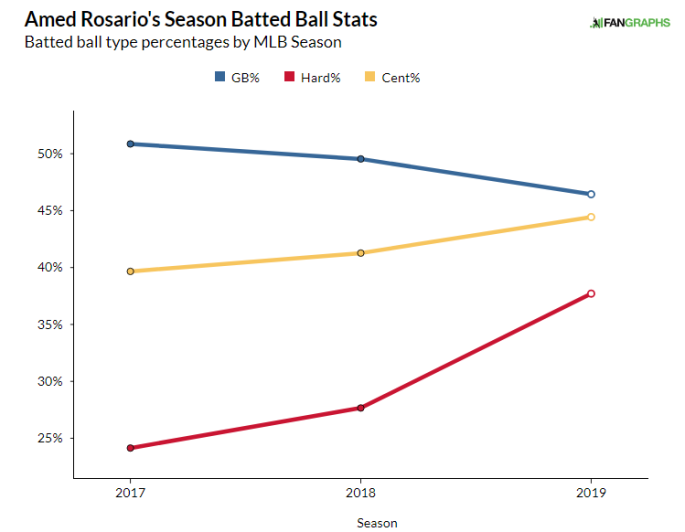 This is all having a real effect on Rosario’s offensive production. His catch-all wOBA has hit a real spike this year after already improving in 2018, and is now close to the MLB average:

Yes, that still means Rosario has a below-average wOBA, but consider the fact that he plays a premier defensive position in shortstop, and a near-average bat becomes more valuable. If this trend continues its upward trajectory, Rosario could be a plus offensive player despite being a shortstop. This year, the average MLB wOBA of .319 is surpassed by only 11 shortstops – 8 were All-Stars this July.

Let’s dive a little deeper into Rosario, though. So much of his struggles offensively have been tied to his plate discipline, as evidenced by his relatively poor BB/K ratio of 0.27 (0.24 in 2018, and a mind-blowing 0.06 his rookie year). However, he’s made real, tangible strides with when he does and doesn’t use the bat. Look at how his O-Swing% (percent of the time he swings at pitches outside the strike zone) and Z-Swing% (percent of time he swings at pitches inside the strike zone) have trended: 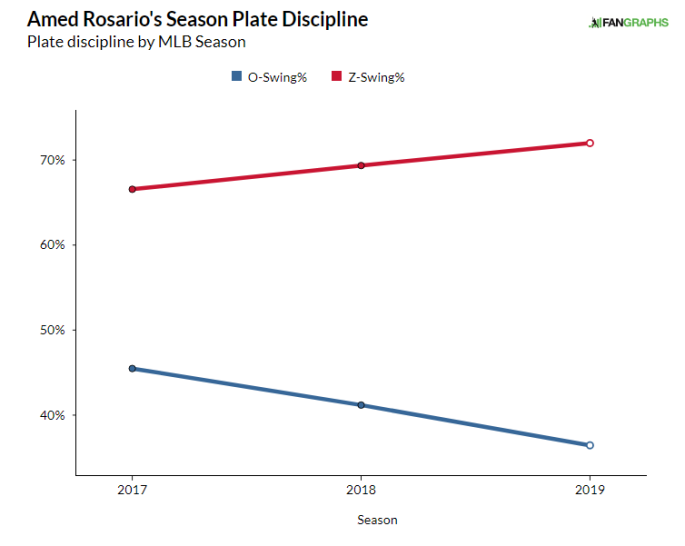 Another fun visualization courtesy of Fangraphs: look at these heat maps showing Rosario’s swing percentage last year vs. this year:

The changes aren’t Broadway dramatic, but they are clear. Take a look at the few boxes just above the strike zone, for example. Last year, there’s plenty of red. This year, not so much. The same thing happens on the right side of the zone – the classic slider “chase” for a right handed batter. In 2018, Rosario was swinging over 50% of the time in 5 of the 8 zones on the outside edge of the plate. In 2019? 0 of 8.

Here’s an example of one of those outside pitches in 2018:

That’s a player clearly changing. Even more stark, though, is how he’s changed his approach on the first pitch. In his first two seasons, Rosario was falling in a hole on the first pitch of his at-bat over two-thirds of the time, despite an incremental step in the right direction in 2018. Look at how things have changed thus far this year:

That’s a pretty stark drop in percentage of first pitch strikes, and it’s even more encouraging when you consider the grey line (MLB average) has slowly risen over the same three years. While pitchers are throwing more and more first-pitch strikes, Rosario is suffering from them less and less, and is currently actually below the average rate.

Another interesting tidbit is the pitch type – MLB pitchers have approached Rosario dramatically differently this season. After throwing him almost 40% four-seam fastballs in 2017, pitchers have been less and less willing to give Rosario the cheddar – even though they’ve thrown it at a higher and higher rate on average: 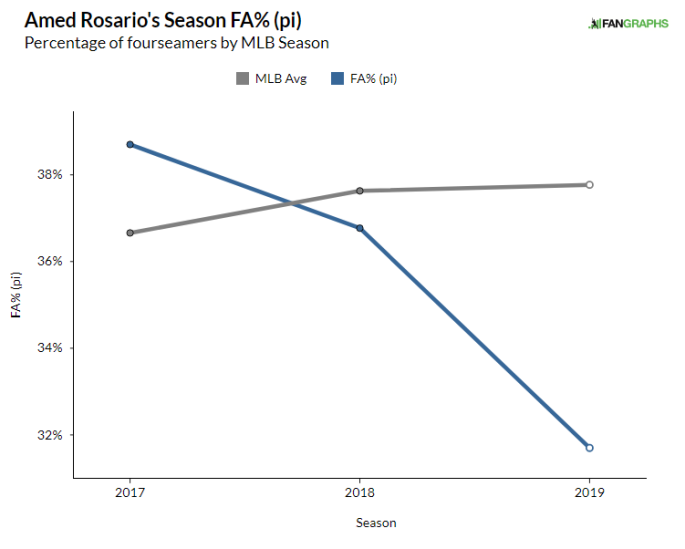 This could mean a lot of things. However, if scouts think Rosario is weaker hitting breaking pitches than four-seam fastballs, and that’s causing the dramatic decline in FA% above, then that’s even more reason for Rosario optimism – all of the stats I’ve shown you earlier are improving the way they’re improving, despite pitchers attacking Rosario’s weaknesses more and more often. The league is learning about Amed, but Amed’s learning quicker.

You can see in his Statcast rankings how different of an offensive player he is this season: 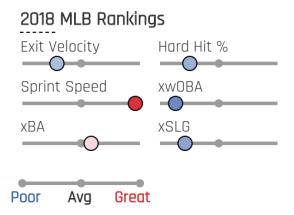 If you chart his barrel percentage, launch angle and exit velocity by season, you get some hills that would be tough to hike up:

If it feels like I’m beating a dead horse at this point, it probably means I am, but consider that every chart I’ve showed you has been a different metric; a different indicator, though many of course correlate with each other. It does not appear to be a fluke – Amed Rosario’s bat has been improving with significance and with a high confidence level, and though your expected value for him may have changed since he entered the league, still 23, his ceiling remains every bit as high as it’s ever been.

What about his defense? It’s been a real concern this year, and early in the season, it was as bad as it’s been in his career, as he committed 9 errors by May 5, the most in the National League at that time.

He’s committed only 3 since, and though errors are far from the best catch-all measure of defense, it’s a good sign that the first month of 2019 may have just been a mental blip. The interesting part is he seems to look like he’s really good at shortstop:

It’s clear the raw talent is there, and though his defensive WAR component is 2nd-worst among MLB shortstops as I mentioned earlier, he’s slowly dug himself out of the big hole as the season’s gone on.

I know Amed Rosario's defense is not well reviewed by either the eyes or the metrics, but I feel like I've seen him make about 4 great plays in the last week.

It’s also possible the Mets decide his future isn’t at shortstop – they’ve had conversations about moving him to center field, where New York currently has an abyss. There’s no telling at this point whether such a move would be successful or even prudent, but it’s a move where his improving bat would still be at a premier defensive position, meaning he probably wouldn’t lose much value overall.

There’s a wide range of outcomes for Rosario. It’s easy to look at his pedestrian career thus far after his uber-high touting in the minors and write him off, especially considering concerns that he may not become an average defensive shortstop at the MLB level. However, unlike many components of the drama that is the New York Mets, this one still has plenty of reason for optimism. I only ask one thing of you when Amed Rosario finally becomes a star: Don’t be surprised. Be ready.