On July 2nd, the NBA world was shaken by the addition of DeMarcus Cousins to the Warriors for the taxpayer mid-level exception, $5.3 million. Fans of the league were  rattled by the idea that the player some deem to be the best center in the league is joining what is already a dynasty in Golden State. Cousins told Marc Spears of The Undefeated that no other teams had made him an offer – this statement was disputed by some members of the Pelicans’ media, but it seems that regardless of where in the middle the truth lies, there was no big offer out there for Boogie. So instead of taking the non-taxpayer mid-level exception, or some other deal that he deemed to be below his true value, Cousins decided to give up money to join the best team in the league.

There are reasons why someone with Cousins’ level of talent was unable to gain a contract of significant value –  he’s recovering from a massive injury, that more or less destroyed Elton Brand’s career, and he is known to be an issue in the locker room – but the Warriors had to pull the trigger when the risk for them was as low as it was. The vast majority of NBA fans and onlookers believe that this transaction was the single biggest move to help the Warriors win the title. However, this is not the case – the biggest move for the Warriors occurred at 12:40 AM on Sunday morning, when the Rockets let Trevor Ariza leave Houston.

“He makes us better. Those smart questions are super important to come from an owner. It crystallizes the decision-making. It challenges everyone to be at the top of their game.” This is what Rockets GM Daryl Morey said to the Houston Chronicle about not Trevor Ariza, but former team owner Leslie Alexander, last year after news that Alexander was selling the team became public. Morey, who often gives out hard facts and doesn’t try to sugar coat, was almost universally glowing when he spoke about Alexander, a true partner as he accomplished his ascent into the top tiers of NBA management. Alexander invested heavily in “fledging technology” early in Morey’s time with the Rockets, per a 2012 SI article about Morey’s “Moneyball”-esque strategy. This once in a lifetime partnership culminated in the Rockets taking the almighty Warriors to Game 7 of the Western Conference Finals this past year, and the 2018 NBA Executive of the Year award for Morey, ostensibly ready to challenge Golden State once again. If the beginning of the 2018 offseason is any indication, the Alexander-Morey relationship was more once-in-a-lifetime than previously thought.

Daryl Morey and Leslie Alexander had an excellent rapport during their co-tenure with the Rockets.

As it stands on July 3rd, the third day since NBA free agency deals have been agreed upon, it is uncertain who the Rockets’ starting 3 will be on opening night, but we know that it won’t be Trevor Ariza. Ariza played 37 minutes per game in the 2018 Western Conference Finals, spending the majority of that time guarding Kevin Durant. Over the last few years he has been a workhorse for the Rockets, averaging over 34 minutes per game in every season since 2014-15. He has been the primary wing defender for all of those years, a role that any team that wants to compete in the Western Conference desperately needs filled. Yet when the time came for the Rockets to re-sign their key contributor, they didn’t, as Ariza left with no compensation for the Rockets, and no value gained in his departure to Phoenix for 1 year and $15 million. On top of the pain of losing one of their key players and fan favorites, this deal was very bizarre. The Rockets wouldn’t have lost future flexibility with only a one-year deal. Now, they have no way to replace Ariza, as they are over the cap (teams are allowed to go over the cap to re-sign their own pending free agents). There was no reason for the Rockets to simply let him walk, except for one – the luxury tax. With the signing of Ariza, the Rockets would have had to pay an extra roughly-$30 million in luxury tax, unless there were some sort of a payroll-decreasing trade made later in the season. 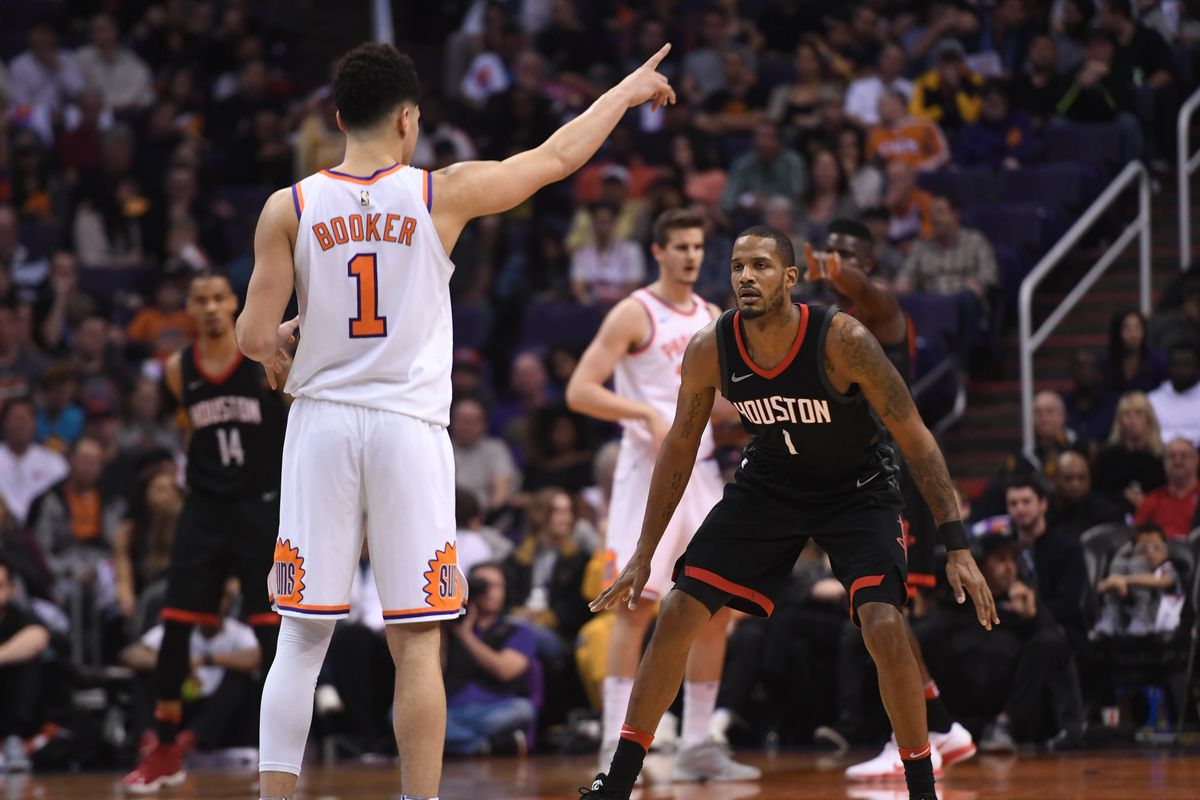 Trevor Ariza will be teaming up with Devin Booker next season instead of remaining with Houston for what would’ve been little risk.

During the Dwight Howard Rocket years, Leslie Alexander’s Rockets team was in the luxury tax to end the 2014-15 season, even before the NBA’s massive financial boom. The rival Oklahoma City Thunder, as it stands today, will pay $134 million in luxury tax for the 2018-19 season. Last year’s Cleveland Cavaliers paid over $50 million in luxury tax. The Golden State Warriors will likely pay around $100 million in luxury tax this year. However, unlike DeMarcus Cousins, it doesn’t appear that new Rockets owner Tilman Fertitta is willing to give up money in order to compete for a championship.

Fertitta purchased the team in July 2017 for a record $2.2 Billion. He is the owner of Landry’s, a restaurant and hospitality company, and also is the star of the reality TV show “Billion Dollar Buyer”. As of July 2018, Forbes estimates his net worth at $4.4 billion, far above that of Clay Bennett, the owner of the Thunder (not on Forbes’ Billionaires list for 2018). The question is why is Bennett and the Thunder, a team that was far worse than the Rockets last year, willing to spend so much more than Fertitta? There hasn’t been a great answer to this question from any national or local media, however, if you look up Fertitta on Google today, you would come across news that Fertitta was served with a lawsuit by a number of contractors who alleged to be unpaid to the point of $30.5 million on a building that Fertitta opened in March.

Rockets fans may say to not worry about one signing, and that small sample size doesn’t truly determine if Fertitta is going to refuse to spend continually going forward, but so far the 2018 offseason for the Rockets has been subpar. Clint Capela has been deemed to be upset with the franchise for what he saw as a lackluster offer, per Brian Windhorst. Windhorst continued to say that Capela’s agent has reached out to a number of other teams looking to secure a larger commitment in restricted free agency. The Rockets haven’t been able to commit to giving Clint Capela the max.

Luc Mbah a Moute was an essential piece for the Rockets, too, and is who many Rockets fans believe to be their starting small forward for 2018. However, Mbah a Moute is also a free agent, and his return to the Rockets seems far from inevitable. Mbah a Moute has a number of suitors, including the Washington Wizards, as reported by Candace Buckner of the Washington Post. If Mbah a Moute receives an offer above the taxpayer mid level exception, the Rockets will not be able to resign him, and it appears as if the Rockets aren’t guaranteed to offer even that.

The only players the Rockets have signed at this point are Gerald Green and Michael Carter-Williams to a minimum contracts. The Carter-Williams signing has not been well received by fans, and is admittedly a very odd fit. He is a solid defender but a dreadful shooter, which is odd because the Rockets shoot more three pointers than any team in NBA history. The goal would be for Carter-Williams to develop a jump shot, but that is a risk unlikely to pay off. The Rockets are also rumored to be interested in James Nunnally, a Euroleague player who averaged 9 points per game with Fenerbahce last season. This would also likely be a minimum contract.

In every salary-capped sport, there is a sort of player-fan dance that occurs. The fan wants the player to take a small enough salary so that the player can stay, and the team can fill out the rest of the roster to be competitive to win a title. The player wants to make his true value, but also not anger the fan base that he is a part of, and be able to play on a title contending team. If the player wants too much, the player and fans leave the dance apart, he leaves the team, and the fans say he is too greedy and stop rooting for him. If the player is able to stay on a team-friendly contract, the player makes less than he should, but the fans are happy and support the player more than before. The NBA is the rare situation where the owners also play a role in this dance – the owner can choose to spend and go above the luxury tax to field a team, like the Warriors and Thunder are doing this year.  Or, for some owners, winning isn’t that important. DeMarcus Cousins was willing to take less money for the chance to win a title. It doesn’t appear that Tilman Fertitta is willing to do the same.