The Internet was set ablaze last night when news broke that the Philadelphia Eagles and the Buffalo Bills agreed in principle on a trade that would send the 2013 rushing champion LeSean McCoy to Buffalo in exchange for 2013’s third leading tackler Kiko Alonso. Many were shocked to see the Eagles part ways with their most productive player on offense, who has rushed for over 1,000 yards four out of the last five seasons, for a linebacker coming off an ACL tear. Before writing this trade off as a complete disaster for the Eagles, let’s take a look at the evidence.

LeSean McCoy’s 2014 campaign started off slowly, but he picked up speed (literally) towards the end of the season, and finished with 1,319 yards on the ground. Of course, McCoy’s incredible talents as a running back play a major factor in his racking up so many yards, but his former offensive line deserves just as much credit. All of the four starting offensive lineman that at this point are set to return to Philadelphia (the Eagles released starting right guard Todd Herremans a few days ago) had a run block rating per ProFootballFocus that ranked in the top 10 of their positions last season. The table below shows just how dominant the Eagles’ offensive line was last season in the running game.

Another stat that truly shows how much the Eagles offensive line aided LeSean McCoy last season is ProFootballFocus’ Elusive Rating. The Elusive Rating boils down a runner’s success beyond the point of being helped by his blockers. Although McCoy is thought of as one of the most elusive runners in the league, his 28.9 elusive rating is 31st best out of 42 running backs. During the Eagles’ week six matchup against the New York Giants, McCoy rushed for 149 yards, which was his second-highest total on the year. The images below show just how easy the Eagles’ offensive line made it for McCoy that night.

Pre snap of an 18 yard rush by LeSean McCoy

Ertz picks up defensive end, left tackle and left guard double up on the linebacker 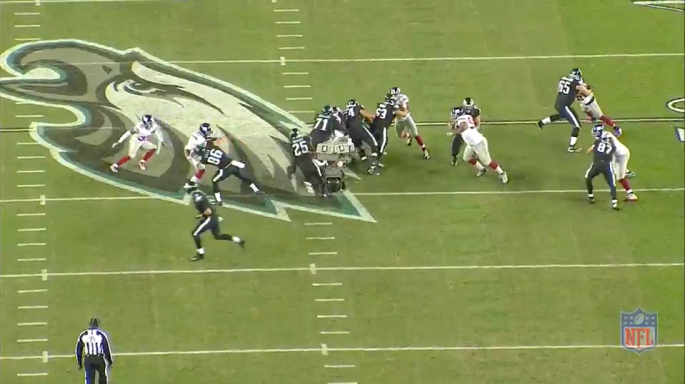 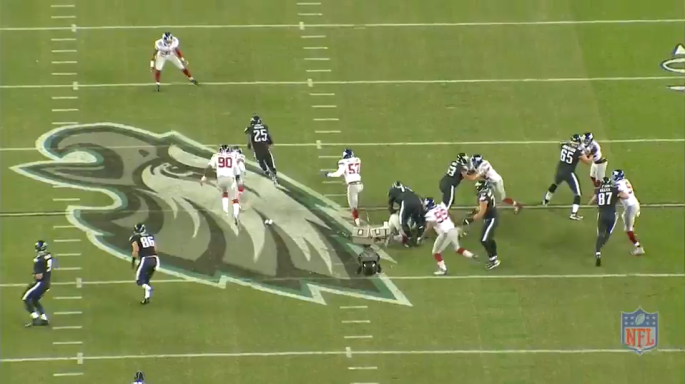 Running back is at the second level of the defense

The Eagle’s o-line not only was able to create holes like that for McCoy that entire game, but for the better part of the season. An offensive line that can create gaps like that will be fine without LeSean McCoy.

McCoy’s stock itself may be falling as well – everyone has heard the cliché that running backs’ production falls off once they turn 30. A closer look at the numbers shows that they may be off a few years. 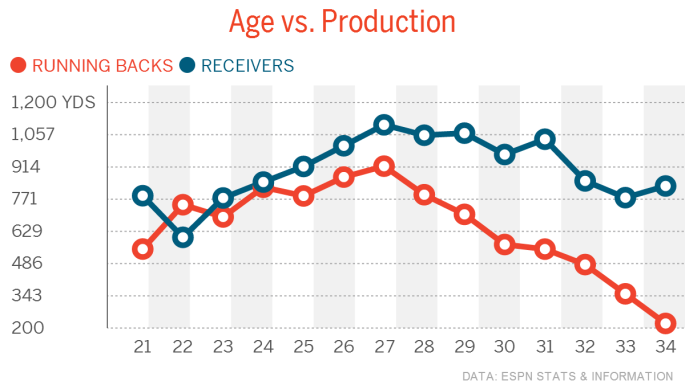 The red line represents all running backs that have played at least four NFL seasons since 2001, with a minimum average of 75 carries per season. The graph shows that after turning 27, the average running back rushing total drops by 15% in one year, 25% in two years and almost 40% by the time they are 30. LeSean McCoy turns 27 this July. If his age doesn’t concern you, his 626 carries over the past two seasons, being more than any other running back in the NFL, certainly should. The Eagles figured with all the wear and tear on McCoy’s tracks and his age against him, getting rid of his $10.25 million hit against the cap for an up-and-coming middle linebacker might be the best move.

The Eagles are getting a solid, young, and inexpensive player out of this deal. Although Kiko Alonso missed all of his sophomore season due to a torn ACL, which will be a concern for the Eagles moving forward, he has the potential to be a star in this league. Alonso finished his rookie year with 159 total tackles, 2 sacks and a forced fumble. Where Alonso really shined was in pass coverage – he finished the 2013 season with 4 interceptions, tied for most by an inside linebacker, and when targeted the average quarterback rating against him was a 74.0, fourth lowest in the NFL. He also had the second highest pass coverage rating via ProFootballFocus amongst inside linebackers. Alonso will provide a major upgrade to a defense that gave up the 28th most yards per game last season, and his cap hit for this season will be less than $1.2 million.

Yes, the Eagles lost a fan favorite and a dynamic player in LeSean McCoy, but running backs are easily replaced in this league. Just look at the success of rookie running backs over the past few years, like Jeremy Hill last year (1,124) Eddie Lacy in 2013 (1,178) and Alfred Morris in 2012 (1,613). With the offensive line the Eagles have intact, the money they save (and will be able to spend on free agents), and the upgrade they acquire at linebacker, this trade looks like a total win for the Philadelphia Eagles.