The most popular sports league in the world starts back up this weekend, and with Manchester United playing Swansea City, it will sprint to a start this Saturday. Looking to the Sports Books for a look at how the bettors believe the league will end, Chelsea is the favorite at 15-8 (giving them around a 34.78% chance of winning the title), Man City is a close 2nd at 9-4 (30.77%), Manchester United is 3rd – decently far behind the Blues and City – at 9-2 (18.18%), and Arsenal rounds out the top 4 at 6-1 (14.29%).

Currently the trendy pick to beat their betting odds is Arsenal, who has been pegged by writers and fans alike to have a top 2 finish, or even hardware in their trophy case, with the additions of Alexis Sanchez, Matthieu Debuchy, and potential wunderkind Calem Chambers. However, Arsenal isn’t the sleeper team that should have better odds to win the Premier League, but the other team in red, Manchester United.
Truth be told, Manchester United was going to be due for a bounceback year even if David Moyes didn’t come back to the squad, with the massive amount of bad luck that came on the Red Devils last year.  Goal Differential is usually a more telling statistic for how well a football team performed over the the course of a season, because while beating a team 3-0 and beating a team 2-1 both give the team 3 points, the point totals often don’t fully show how strongly the team performed in the game. When a team wins 3-0, they dominated the game, and proved without a doubt that they were the better team that day, while a 2-1 win with a lucky goal or bad bounce can create doubt that the winning team was undoubtedly better. While Manchester United finished 7th in points in the table and was 15 points back of 4th and 8 points back of 5th, in goal differential they were only 1 goal away from 5th place, and only 6 goals back of 4th-place Arsenal.

Goal differential just takes into account how the team on the field played, and doesn’t begin to account for the significant time missed by a multitude of their top players, such as Robin Van Persie, Wayne Rooney, Namanja Vidic, Rafael, Rio Ferdinand, Michael Carrick and Danny Welbeck. All of these players will be back for the Red Devils, and there is no way the team could be as unlucky with injuries this year as they were last. 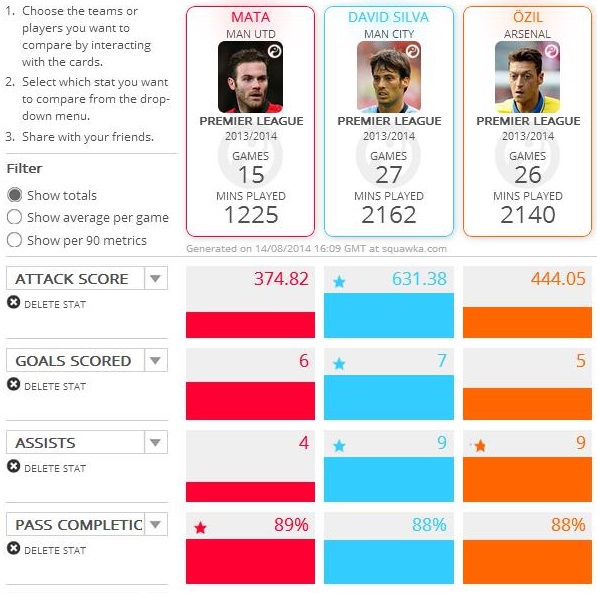 Another huge addition for Manchester United is having a full season of Juan Mata, their midseason acquisition last year from Chelsea, who will have the whole season to perform. In the above chart from Squawka, you can see that Juan Mata compares equal to, if not better than, Ozil and David Silva, on a per 90 minutes basis of his performance for Manchester United. Having his services for the full year will be a big boost for the squad.
The new summer additions, such as Luke Shaw and Ander Herrera, will be a big help, and Man U is near a deal with defender Marcos Rojo to further improve their defense. They made multiple bids for Arturo Vidal and Angel Di Maria, which could skyrocket the club’s talent. The Manchester faithful should not only expect a marked improvement from last year, they should be disappointed with anything below a top 3 finish.