The managers of MLB seem to have it down to an art.

Unfortunately, the conventional batting order is nothing but tradition, and no one ever seems to question this idea that’s been around for more than a century. Have you considered that this isn’t actually the optimal lineup to win more baseball games (score as many runs as possible)? Many sabermetric studies have looked to find the truly optimal batting order, based mostly on the two most important hitting stats: OBP (on-base percentage) and SLG (slugging percentage). Both of these stats, based on regression modeling, have much higher correlations to runs scored than BA (batting average), which is conventionally the main statistic used to measure the quality of a hitter – once again, an archaic tradition that the game of baseball has unfortunately been resistant to changing.  A higher correlation, in non-statistical terms, means that a team that has a higher OBP or SLG will most likely have more wins over the course of a season than a team that just has a higher BA.

Back to the batting order – studies have striven to find many different tidbits about lineups that would lead to optimization. One method, as written by Sky Kalkman in Beyond the Box Score, is the importance of avoiding outs for each player in the lineup.  Basically, over the course of a season, which spots in the lineup are most crucial to winning in terms of OBP?  Which spot’s OBP has the biggest effect on a team’s 162-game success? Here’s a section from his study:

“Another way to look at things is to order the batting slots by the leveraged value of the out. In plain English (sort of), we want to know how costly making an out is by each lineup position, based on the base-out situations they most often find themselves in, and then weighted by how often each lineup spot comes to the plate. Here’s how the lineup spots rank in the importance of avoiding outs: #1, #4, #2, #5, #3, #6, #7, #8, #9”

According to Kalkman’s study, you should put your hitters in the specified order, based on descending value of OBP.  Because the first batter’s OBP has the greatest effect on your team’s total runs, then fourth, then second, etc., ordering your lineup in such a way would be a big step up from just generalizing and using traditional methods. To explain the concept further, and to show one way in which managers have failed to give their teams the best chance to win, Bill Petti of FanGraphs developed the following heat map graphic (darker green meaning higher OBP, and darker red meaning lower OBP): 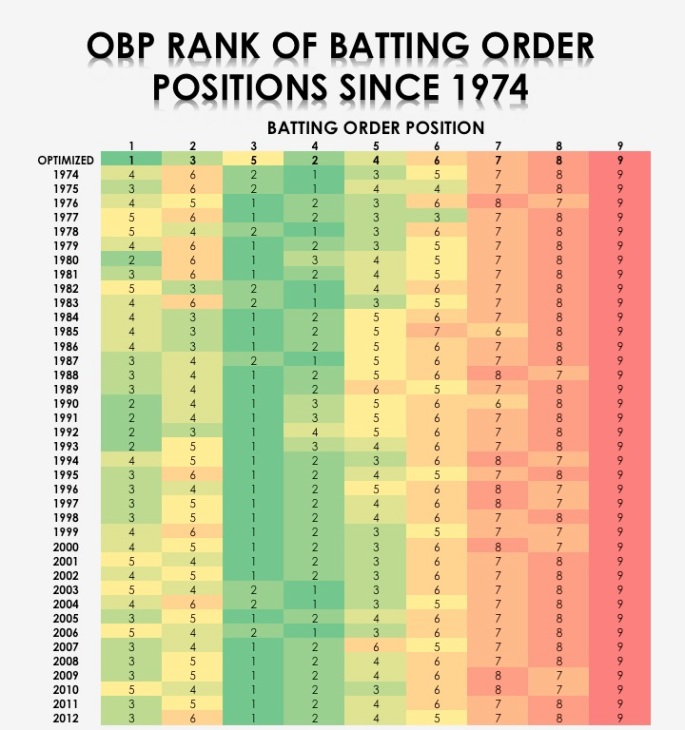 Clearly, for the majority of the past forty years, managers have been putting the player with the greatest ability to get on base in the spot that ranks fifth in importance, in terms of OBP.  Vice versa, in the most important spot for a high OBP, managers have tended to, on average, put their third or fourth best player at getting on base. As a baseball fan, facts like this truly disappoint me.  And although the leveraged out is one way of optimizing a lineup, there are additional important studies to consider when crafting your most successful lineup – which MLB managers also seem to ignore.

Lesson: bat your highest OBP player first, while generally following Kalkman’s list the rest of the way, in order to avoid more costly outs over the course of the season.

The most important thing to do on offense in baseball is to score runs. So why not continue to optimize our lineup to allow us the best chance of scoring the most runs? TangoTiger has developed a run expectancy matrix – predicting the number of runs scored in each of 24 possible situations based on the occupancy of the bases and the number of outs. The data was taken over a span of (coincidentally) 24 years.  What did it find?

The matrix has an x-axis of the number of outs, and a y-axis of the baserunner setup.  Each of the decimal numbers represents the expected number of runs scored from that point on in the inning. For example, with the bases empty and nobody out, there is a base run expectancy of .477. What does this matrix tell us?  For one, it shows that, in general, sacrifice bunts – a conventional-wisdom baseball tactic – are generally not smart.  A man on first with no one out gives you a higher run expectancy than a man on second with one out, and so on.  There are other similarly interesting facts hidden in the matrix as well, but we want to see how it affects our optimal batting order.

According to Keith Law at ESPN, we can consider the number of plate appearances each lineup spot receives, as well as the frequency with which each lineup spot gets each base-out situation (vertex in the matrix) to actually discern which spots in the lineup have the most value in terms of run-scoring over the course of the season.  In other words, we are looking for the spot in the lineup that has the potential to produce the most runs by performing well.  Which lineup spot is that?  The research doesn’t say third, but second – the spot that as recently as 2012 was given to each team’s sixth best player at not getting out according to the aforementioned heat map graphic.  How can so many teams be willing to hurt their chances of winning by not looking at the facts?

Lesson: bat your best overall hitter – perhaps the one with the highest OPS (OBP plus SLG) or SLG – second in order to drive in more runs over the course of a season.

The myth of the stolen base

One of the most well-known lineup rules is that the top spot in the order (and many times the second spot as well) belongs to speedsters who can steal bases and make things happen on the base paths.  However, managers never actually consider when stolen bases are most valuable.

Consider this simple thought experiment – why do players with the ability to advance bases on their own bat directly in front of the team’s most skilled hitters?  If your base-stealer gets on base right before your guys who can produce extra-base hits most often,  is he getting his full value?  A home run from your best power hitter will knock in baserunners no matter which base they’re on, while a single from a less polished hitter won’t get you a run unless there are baserunners in scoring position. The weaker batters toward the end of the lineup are actually the ones that need help driving in runs.

Here’s just one example – Dodgers shortstop Dee Gordon currently leads MLB with 46 stolen bases, and manager Don Mattingly therefore bats him leadoff.  But he’s probably not the right choice for that spot, as he’s oscillated between 3rd, 4th, and 5th in OBP among the team’s starters this season (we learned earlier that your best player at getting on base should lead off). Additionally, the players that follow him in the lineup – usually Yasiel Puig, Adrian Gonzalez, and Hanley Ramirez – sport the three best slugging percentages on the Dodgers!  Clearly, that trio has the ability to produce extra base hits and knock Gordon in themselves, without him risking an out for second base – a tradeoff that the run expectancy matrix has already told us is fruitless. The most common 7th and 8th batters on the Dodgers, Juan Uribe and A.J. Ellis, have the 7th and 20th highest SLG, respectively, on the team, and Ellis is followed in the lineup by the pitcher, likely the team’s worst hitter.  Don Mattingly would probably cringe if he knew how many runs his shortstop could have scored on singles from Uribe and Ellis, runs that were never scored, and how many times his shortstop risked an out (or actually got out) stealing second or third, only to be driven in by a Puig or Gonzalez bomb.  Hopefully soon, data will surface that will actually show managers like Mattingly exactly how many runs they’ve given up this way

Lesson: in the 5th-6th-7th area of the lineup, bat competent base stealers who can give your weaker hitters opportunities to drive in runs.

So, let’s revisit the batting order and see how managers could actually be pulling their weight in the W/L column.

There is much more work to be done – and much work currently being done – in terms of creating the perfect batting order.  However, there is already much concrete statistical evidence, including leveraged outs, run expectancy, base-out situations, and run-scoring potential, that show that the lineup makers are truly failing both their teams and their fans by not providing better strategies by which to win baseball games.  Now, the matter becomes when the league will open its eyes.

11 thoughts on “The Batting Order: Where Managers Cost Their Teams Wins”