The loss of Neymar

The entire nation of Brazil was punched in the stomach when the news came that Neymar, their young superstar, was out for the remainder of the World Cup, and the emotional video that Neymar sent out to the country caused tears for millions across the world. For most nations in the World Cup, losing a player of Neymar’s caliber would probably end their Cup dreams, the same way that #7 FIFA ranked Uruguay looked like a completely different team in their two games without their superstar, Luis Suarez. Even Argentina didn’t look the same after Angel Di Maria left the field and Enzo Perez, midfield for Benfica, stepped in for the rest of the match.

Fortunately for Brazil, the two most logical replacements, Willian and Bernard, would start for most any other squad in the World Cup. Willian is a battle-tested, attacking midfielder who plays for Chelsea and has a style similar to that of Neymar. Both Willian and Neymar are dribblers who can hold possession and use their speed to get the ball up the pitch. When you look at the stats from Squawka, you can see how Willian is better in several key areas than Neymar, though Neymar is still the superior overall player, especially when it comes to scoring goals. 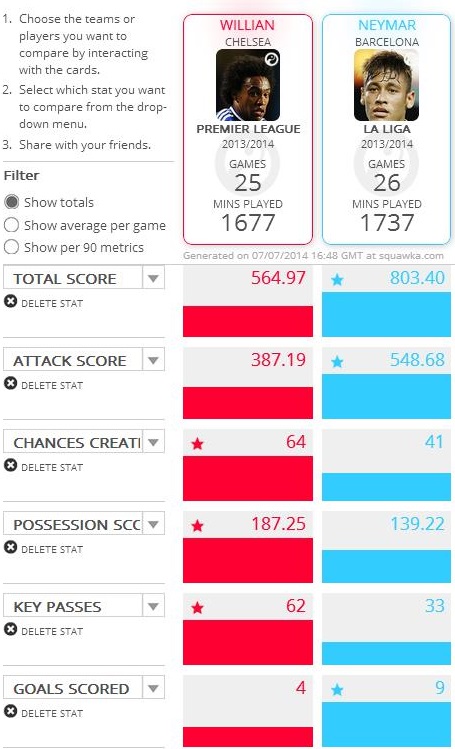 From the comparison on Squawka, you can see that Willian has the edge in creativity, in terms of creating chances in the club league season for Chelsea, in the more difficult Premier League, and in about the same amount of time played, he created vastly more chances, 64-41. He also had about double Neymar’s key passes, and even had a better Squawka possession score than Neymar. However, the one thing that Brazil has especially lacked this world cup from their two strikers, Jo and Fred, has been goal scoring, and Neymar does a much better job scoring goals than Willian, scoring more than double Willian’s goals this season. Jo and Fred have scored 1 goal combined, and most of the scoring responsibilities have fallen on Neymar. Willian doesn’t have the same scoring ability as Neymar, but Brazil’s World Cup hopes depend on his passing and creative ability to bring more out of the other Brazil attackers, such as Jo, Fred, and Hulk.
Thiago Silva’s absence, and why it is difficult to properly measure
Thiago Silva was suspended for the upcoming semifinal game against Germany, a huge blow after a remarkably stupid yellow card from the seasoned vet. Thiago Silva’s replacement, and the analysis that comes with it, is much more complicated, and there is no cut-and-dry replacement for him. Silva is one of the best defenders in the world, and any time a team is missing a player of Silva’s quality, it undoubtably hurts. However, when just looking at the stats between Thiago Silva and his replacement, FC Bayern star Dante, there does not appear to be a large gap between the two players. 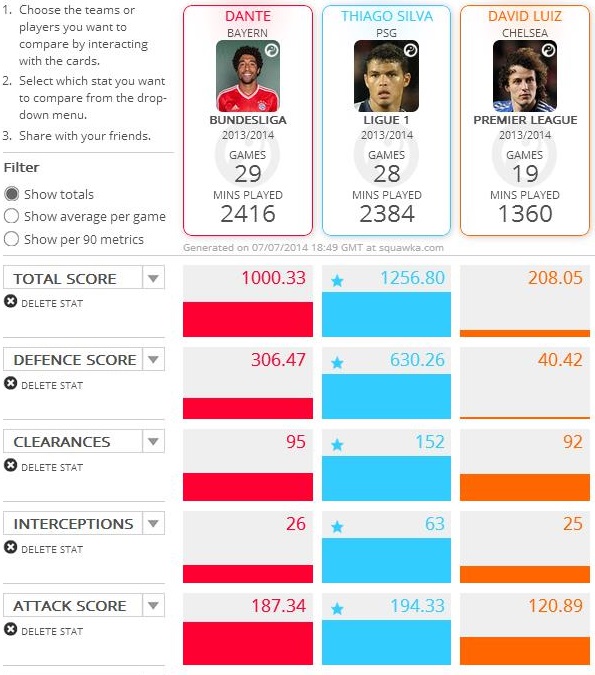 It is a well-known fact that David Luiz plays more like a defensive midfielder than a true center back, and his squawka score reflects those tendencies, showing his very high attack score, relative to his total minutes played. Dante also has a high attack score relative to his defending score, which is where the biggest problem lies for Brazil. Thiago Silva does a phenomenal job covering defensively for Luiz, and his defensive prowess is shown in his defense score in Squawka which is more than double Dante’s. His clearances also stand out, being more than 60 above Dante in a similar number of minutes played. David Luiz and Thaigo Silva’s great attack/defense chemistry (which PSG paid 50 million pounds to get) is key to the Brazilian back 4, with both Marcelo and Dani Alves known for their attacking skills. This all shows how much the defensive ability of Silva is relied upon, as Dante will not  be able to play the same style that he excels at.

What this means for Brazil’s chances
All in all, losing two of your best players can only hurt a teams chances of winning, and Brazil’s biggest challenge all tournament will come next game against the best team in the tournament, Germany. If the last two games were being played on a truly neutral field, Germany would be the favorites to take home the title, however, with Brazil’s home field advantage, they are still the favorite, with Nate Silver of FiveThirtyEight giving them a 46% chance of winning the title and a 67% chance of beating Germany. However, while Silver thinks that the lost value is from the attack, with the attack-minded Dante and increased chances from Willian, the attack may stay closer to form than expected, while the area to watch for Brazil is their defense without Thiago Silva’s support.