This is a matchup the NBA probably wasn’t looking forward to – the fading Pacers against one of the worst teams in playoff history in the Hawks. Can Indiana get back on track and get motivated for the postseason? This is a rematch of last year’s first round series. 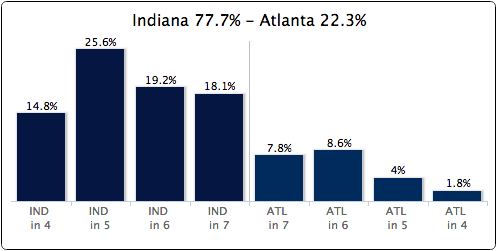 Under the leadership of the steady Frank Vogel, the Pacers will respond to urgency after falling behind in the series, and win out on their way to round two.

The ‘Cats are back in the playoffs, but they’ll have a tough task ahead of them in the three-time defending Eastern Conference champion Heat. With Big Al Jefferson in the middle, can they put enough pressure on Miami’s small lineups to make things interesting? Charlotte has ended the season strong, while Miami has had a rough go of it in March and April.

As they did last year against an inferior Bucks squad, Miami will blow through the competition in round one, though Charlotte will steal game 3 in Carolina.

With playoff legends Paul Pierce and Kevin Garnett, alongside established veterans Deron Williams and Joe Johnson, Brooklyn takes its intriguing lineups into a changing-of-the-guard matchup with Toronto, who brings youth and hunger to this battle. 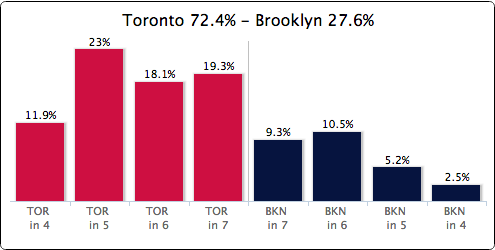 Two of the most underrated teams in the playoffs face off. Brooklyn’s experience, alongside Jason Kidd’s great coaching, will push this series to the limit, but with the league’s fourth-best point guard by both WAR ratings in Kyle Lowry next to hungry first-time All-Star DeMar DeRozan, and superior ability to play on the road, the Raptors will make Drake happier than Jay-Z and advance past the Nets.

John Wall and Bradley Beal lead one of the league’s most explosive backcourts and a run-and-gun, three-point shooting offense for the Wizards against Tom Thibodeau’s grind it out defense for the Bulls in a clash of styles that will be more exciting than its billing.

John Wall and the Wizards are ready for the big time, but they’ll have to prove it against one of the league’s best team defenses. Chicago will struggle to score, and Washington will jump ahead in this series despite its beginning at the United Center. However, as the series progresses, Tom Thibodeau will make the necessary adjustments to neutralize the Wizards’ deadly backcourt, and put the cap on a very exciting series.

One thought on “A Quick Who, When, and Why for the First Round in the East”